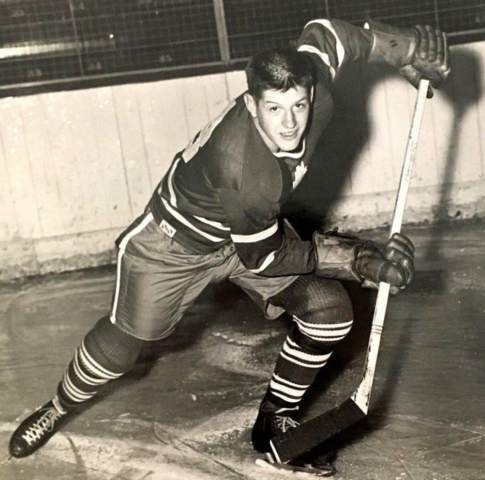 Nesterenko quoted - “I lived across the street from the rink (in Flin Flon). That’s how I got started, when I was four or five. We never had any gear. I used to wrap Life magazines around my legs. We didn’t have organized Hockey like they have now. All our games were pickup, a never-ending game. Maybe there would be three kids to a team, then there would be fifteen, and the game would go on. Nobody would keep score. It was pure kind of play. My father bought me a pair of skates, but that was it. He never took part. I played the game for my own sake, not for him. He wasn’t even really around to watch. I was playing for the joy of it, with my own peers. Very few adults around. We organized everything"

Nesterenko would become a top scorer in junior Hockey with the Toronto Marlboros of the OHA, playing there from 1950 to 1953, and getting a 1 game call up the parent team Toronto Maple Leafs in 1952. Nesterenko split the 1952-53 season between the Marlboros and Maple Leafs.

Nesterenko played for the Maple Leafs until he was traded to the Chicago Black Hawks by Toronto with Harry Lumley for $40,000, May 21, 1956. Prior to the trade, Nesterenko played with the Western Hockey League / WHL Winnipeg Warriors, helping the team win the 1956 WHL Championship, and the 1956 Edinburgh Trophy.

Nesterenko had also enrolled at the University of Toronto, as he wanted to continue his education should his Hockey career fizzle out, but the Black Hawks were very keen on having him play for their team. In a very unusual agreement, Nesterenko agreed to play for the Black Hawks, but only if he could continue his education. He would travel back and forth between school and the site of the Black Hawks next game, but rarely would he travel with the team or even get in some good practice time. He pretty much arrived in time to play the game and left quickly afterwards.

The Black Hawks transformed Nesterenko into a valuable defensive forward. His skating ability and Hockey sense made him into a superb penalty killer, who also was known for using his elbows in the corners. and shadowed many of the league's better players.

Nesterenko spent the next 15 seasons playing in Chicago, and would become a Black Hawks legend, loved by the fans and supporters. In 1961, Nesterenko and the Black Hawks were crowned Stanley Cup Champions. Nesterenko was named to the NHL All-Star team that year, and again in 1965.

While playing in a Black Hawks jersey, Nesterenko scored 207 goals, 288 assist in 1,013 regular season games, and 13 goals, 22 assists in 115 playoff games.
The one number that does stand out when you look at his career stat line is that he along with Stan Mikita, Bobby Hull, and Bob Murray are the only 4 Black Hawks to ever play 1,000 games in a Chicago Black Hawks jersey.

Nesterenko actually scored one of the most famous goals in NHL history - Bobby Hull's 51st goal of the season on March 12, 1966. While Hull was credited with the goal, becoming the first NHL player to score more then 50 goals in a season, Nesterenko actually tipped the puck in from Hull's shot as he skated in front of the New York Rangers goalie Cesare Maniago, but as the crowd at Chicago Stadium went crazy and all the buzz around this historic goal being scored by Hull, the gentleman player named Eric Nesterenko was not going to ask for a review of the goal by saying he scored it, and the rest is history - or was it !
Hull finished the season with 54 goals, the most in a season by any player during the Original Six era.

Nesterenko was also involved in another incident regarding Willie O'Ree, the first black player in the NHL. during the 1960-61 season, Nesterenko and O'Ree had gotten into a scuffle while playing, Nesterenko had knocked out O'Ree's two front teeth and taunted him with racial slurs, and O'Ree retaliated with his stick on Nesterenko's head, requiring 15 stitches later.

Nesterenko’s career went from over a decade of the original 6 to seeing expansion in the NHL a couple of times more than doubling the league’s franchises which probably helped extend his career longer than it would have 10 years earlier.

In 1972, his final season with the Black Hawks and his second-to-last season of professional Hockey, Nesterenko gave Studs Terkel one of the most honest and insightful quotes that any athlete has ever committed to the annals of history:

“The whole object of a pro game is to win,” Nesterenko said. “That is what we sell. We sell it to a lot of people who don’t win at all in their regular lives.”

Nesterenko was always different, a reader of books in a professional world where most of his companions chose to pass the days in front of a television set. His athletic colleagues used to refer to him as an "intellectual," and even though they were speaking the word and not writing it, you could hear the quotation marks. His need to examine his life, to question the meaning of the fame and glory that had been his since he was a boy, made him a loner among the others, and he was made to know it every day and night of his working life.

Nesterenko went to Switzerland in 1972, and joined the Lausanne HC as a player and coach. he returned to Chicago in 1973, and joined the World Hockey Association / WHA Chicago Cougars, and ended his competitive Hockey days in British Columbia, Playing for the Trail Smoke Eaters of the Western International Hockey League in 1975-76.

Nesterenko eventually ended up in Colorado, where he did a number of odd jobs, including helping to set up a Hockey program for the locals. In the late 1970s he learned to be a ski instructor, and worked ski patrol for two years at Keystone. After moving to the Vail Valley in 1981 for a ski instructor job, Nesterenko spent a couple of summers in the Arctic on the 70th parallel above Alaska, looking out for Russian aircraft with the Defense Early Warning System.

In following summers he was a guest university teacher, an actor in the movie, “Youngblood,” and, in 1988, he helped build the Orient Express chair lift for the original access to China Bowl on Vail Mountain. He has continued to teach skiing in the winters since he arrived in Vail Valley. He now lives in West Vail, Colorado.