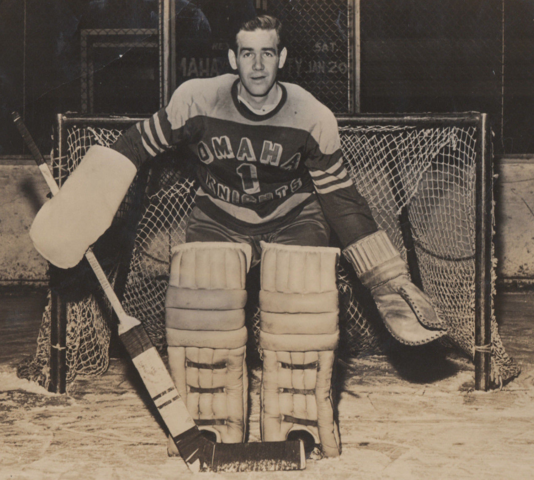 Bell enjoyed success immediately in pro Hockey as he was named to the First All-Star Team while setting the shutout record for the American Hockey League when he blanked opponents nine times en route to the 1943 Calder Cup championship with the Buffalo Bisons.

Bell made his NHL debut with the Toronto Maple Leafs during the 1945-46 season, playing eight games and winning three. After his brief stop with the Maple Leafs, he was assigned to the Providence Reds of the American Hockey League / AHL.

Incredibly, when Bell was sent down to the minors, ten full seasons would pass before he resurfaced at the NHL level. Bell tended goal in twelve different cities (Pittsburgh Hornets / Hollywood Wolves 1946-47) (Washington Lions 1947-48) (Fort Worth Rangers / Springfield Indians / Omaha Knights 1948-49) (Louisville Blades / Buffalo Bisons 1949-50) (Springfield Indians 1950-51) (Syracuse Warriors 1951-54) (Springfield Indians 1954-56) (Trois-Rivieres Lions 1955-56) during his journey through the minors before a call came from the New York Rangers, who signed him to a free agent contract on March 22nd, 1956. In the playoffs that spring, Bell returned to the National Hockey League starting two games for the Rangers.

Following his brief return to the NHL, Bell began a very rewarding four-year stint with the Belleville McFarlands, where he and his teammates represented Canada at the 1959 World Championships in Prague, Czechoslovakia. Bell went 5-1-0 during the tournament and captured the gold medal.

Bell retired from Hockey after his 18th season, having played in the Memorial Cup final, Calder Cup Final, AHL, NHL and the World Championships and winning titles both professionally and internationally as well as being named an All-Star in two different leagues.