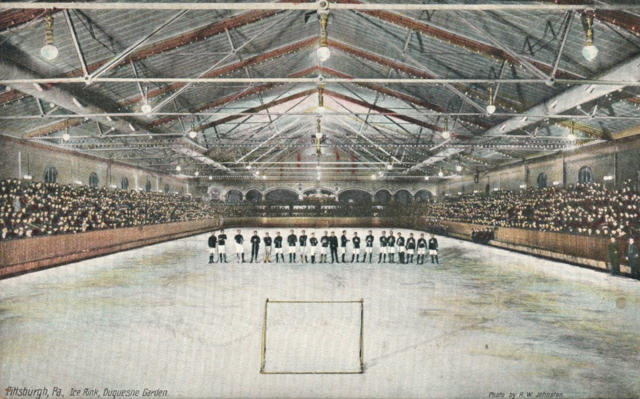 The Gardens was originally built in 1890 as the Duquesne Traction Company, which served Pittsburgh as a trolley barn, in the city's Oakland neighborhood. In 1895, Christopher Lyman Magee, a Pittsburgh politician, spent nearly $500,000 to purchase and renovate the building. He renamed the structure the Duquesne Gardens in 1896, although it was always called the "Arena" by the locals. The Gardens, which had the world's largest indoor ice rink and a second floor ballroom, became a premier indoor venue.

The facility's main attraction was its artificial ice surface, unrivaled in North America. Most other American cities lacked, a facility that produced artificial ice at the time. And with 26,000 square feet of ice surface at the Gardens, was nearly 50 feet longer than the modern-day rinks in the National Hockey League (NHL) and had state-of-the-art refrigeration and resurfacing technology. On January 24, 1899, the Gardens hosted its first ice Hockey game in a match between the Pittsburgh Athletic Club and Western University of Pennsylvania (University of Pittsburgh). According to Total Hockey, the official encyclopedia of the NHL, Pittsburgh was one of the first cities in North America to lure amateur Canadian players for what was a standard $30 a week stipend and a local job in the early 1900s. The manager of a Canadian team returned from a trip to the Gardens in 1902, according to an account in Total Hockey, and gave the following description to the Toronto Globe: "Pittsburgh is Hockey crazy. Over 10,000 turned out for our three games there. The general admission being 35 cents and 75 cents for a box seat . . . the Pittsburgh rink is a dream . . . What a marvellous place it is."

The teams of the Western Pennsylvania Hockey League, and the Pittsburgh Professionals of the International Professional Hockey League, played their games at the Gardens up until 1910. The Gardens' artificial ice surface helped make Pittsburgh a professional Hockey pioneer, much the way the city had given birth to the first pro football players in the 1890s. Players in the WPHL were paid to play Hockey before 1904, but that is when the first professional league officially formed. The Pittsburgh Professionals joined Canadian Soo, Michigan Soo, Calumet Miners and the Portage Lakes Hockey Club to form the IPHL in 1904. However after the 1906-07 season, other professional leagues began popping up and the IPHL disbanded, while the WPHL was revived until 1910. During this era, Garnet Sixsmith, who played on several Pittsburgh teams, once scored 11 goals in a game at the Gardens. His 11 goals is considered to be a record for the arena.

In 1915 the Pittsburgh Yellow Jackets of the United States Amateur Hockey Association (USAHA) was founded. The team evolved from being an amateur to a semi-pro franchise. The Pittsburgh Athletic Associations's Seven, an amateur Hockey club, as well as the Carnegie Tech Hockey club and the University of Pittsburgh Hockey team also played their home games at the Gardens in 1919. By 1924, the Yellow Jackets of the USAHA's Western Division were so dominant that they spun off another Pittsburgh team, the Hornets, who played in the Eastern Division. In 1925, both Pittsburgh club's won the respective divisions and played each other for the 1924-1925 USAHA championship at the Gardens. The Yellow Jackets won the title in a best of seven series, 4 games to none.

In 1925, the Yellow Jackets were sold to James Callhan and New York-based bootlegger William Dwyer and were renamed the Pittsburgh Pirates. The Pirates then joined the NHL on November 7, 1925. During this time, the Gardens' massive ice surface was reduced to conform to the NHL's standards. Pittsburgh's first ever NHL game was played on December 2, 1925, with the Pirates taking on the New York Americans in front of 8,200 fans. The Pirates lost the game in overtime, 2-1. By 1930 financial issues, associated with the Great Depression caused the Pirates to relocated to Philadelphia, before folding. What helped make the city such a hotbed for Hockey in the early part of the century, the Duquesne Gardens, ultimately helped doom the Pirates. The Gardens held slightly more than 5,000 fans, which was fine at the turn of the century but small by comparison in the late 1920s to other arenas sprouting up, such as 18,000-seat Madison Square Garden. The Pirates did not make very much money playing in the 5,000 seat Gardens. The team was so strapped for money that they traded Conacher to the New York Americans during the 1926-27 season for a journeyman player and $2,000. Conacher had been the highest-paid NHL player at $7,500 a year. The Pirates later moved the team across the state to become the Philadelphia Quakers for the franchise's last season in 1930-31.

However the Gardens still witnessed ice Hockey even during these dark financial times. In 1930 Roy Schooley re-acquired the rights to the Yellow Jackets. The Jackets played for two years in the International Hockey League (IHL) before the team was purchased in 1932 by Pittsburgh theatre chain owner John H. Harris, who purchased a new $5,000 sanitary soda fountain for the Gardens and renovated a portion of the building to become one of the largest dance halls in America, back in 1920. By 1935, the Yellow Jackets returned to being an amateur club in the Eastern Amateur Hockey League. In 1936, Harris and the Yellow Jackets helped provide Pittsburgh with another professional Hockey team, the Pittsburgh Shamrocks and established that the Gardens' ice time would be split by the new IHL team and the Yellow Jackets.

Several other historic events took place at the Gardens during Harris' tenure. First, on March 31, 1936 he hired Sonja Henie, a 24-year-old Norwegian figure skater, to perform before a Yellow Jackets' home game. Harris found it difficult to draw a large crowd to Hockey games during the Great Depression, so he hired Henie to entertain the audience between periods. The performances were a rousing success, and Harris soon set out to create an ice show to rival the song and dance spectaculars that were popular on Broadway. He developed the Ice Capades, which premiered in September 1940. The skating corps of 150 young women clad in elaborate costumes captivated audiences. Harris's Ice Capades, founded in Pittsburgh with an $85,000 investment, was sold in 1963 for $5.5 million. Harris also used the Gardens for Ice Capades auditions and as the show's training school, since many of the show's performers were from western Pennsylvania.Then on October 4, 1936, Harris purchased the Detroit Olympics and moved the team to Pittsburgh, where they were renamed the Pittsburgh Hornets, and became a member of the American Hockey League. Some players from the Yellow Jackets and Shamrocks players then joined the Hornets. The Yellow Jackets formally folded, while the Gardens would be home for the Hornets for the next 20 seasons. The Hornets played their first game at the Gardens on November 8, 1936, a 5-2 win over the Cleveland Barons. The franchise later won Calder Cups in 1951, versus the Providence Reds, and in 1955, versus the Buffalo Bisons. On January 10, 1956, the Gardens hosted the American Hockey League All Star Game for the city of Pittsburgh.

The arena was also the first Hockey rink to ever use glass above the dasher boards. Developed locally by the Pittsburgh Plate Glass Company, Herculite glass was first tested in Pittsburgh. Most rinks were using wire mesh before the shatterproof glass was invented.

On March 16, 1920, USA Hockey, as the governing body for amateur ice Hockey in the United States, was founded at the Gardens. That same year at the Gardens, Roy Schooley, the arena's manager, put together an 11-player squad that won silver at the Antwerp Games, in the sport's Olympic debut. The Gardens also hosted several contests, which were played on Mondays and Tuesdays, to help raise money in order to cover the expenses associated with sending the U.S. Olympic Hockey team to the games held in Antwerp, Belgium.