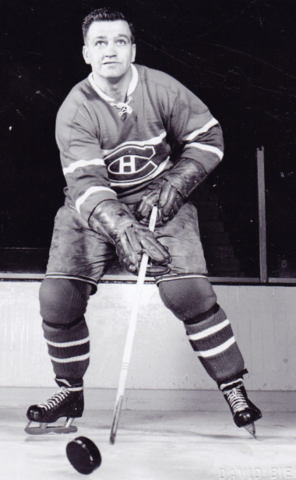 Geoffrion played his junior Hockey in Quebec, starting with the Montreal Concordia Civics in 1946, then staring for the Laval Nationale from 1947 to 1950.

In 1949-50, Geoffrion led the league with 52 goals and 86 points; all in just 34 games. "There was a sportswriter named Charlie Boire who used to work for the Montreal Star. I was always practicing my slapshot. I was at the Forum after a practice and Charlie came up to me and said, 'Do you mind if I call you 'Boom Boom'? I said, 'I don't care.'" Boire used the tag to describe the sound of the puck leaving Geoffrion's stick, then banging off the end boards.

"I invented the slapshot when I was nine or ten years old. Everyday after school, I practiced behind the church," Boom Boom had said, explaining the genesis of his nickname.

The 1951-52 season set the tone for the career that was to follow, as Geoffrion became one of the league’s marquee players. Curious fans filled rinks around the league, drawn in by tales of the newcomer’s loud, unorthodox shot. Fans went home awed and impressed. Goaltenders went home bruised and humbled.

By the time the schedule came to an end, Geoffrion stood sixth among NHL scorers. His 30 goals were tops on his team and his 54 points were second only to veteran Elmer Lach. The Calder Trophy, awarded to league’s top rookie, went to Geoffrion in 1952.

As Geoffrion continued to develop, the team’s fortunes improved as well. With a powerful wrist shot and accurate backhand to complement his trademark slap shot, Geoffrion climbed to the upper echelons of the scoring list year after year.

For some reason, Geoffrion never seemed to win personal honors in years that the team won the Stanley Cup. In 1953, his name was engraved on the Cup for the first time.

In 1954-55, he led the NHL in goal scoring with 38 and was the Art Ross Trophy recipient with 75 points. But that season was a most unusual one for Geoffrion.

At the beginning of March 1955, Maurice Richard was leading the NHL in scoring. Geoffrion was second two points behind and Jean Beliveau was third three points behind Richard. The Montreal fans were elated - a Canadien hadn't won the scoring championship since Elmer Lach in 1947-48, and Rocket Richard had never won. Then, on March 20, Richard and Bruins' defenseman Hal Laycoe got into a stickswinging feud that saw NHL president Clarence Campbell suspend the Rocket not only for the three games remaining in Montreal's regular season schedule, but for the duration of that spring's playoff as well. The city was stunned. During the next game, a contest versus Detroit, the furious crowd rioted when Campbell took his customary seat at the Forum. A tear gas bomb was thrown and the Forum was evacuated. But looting and rioting took place in Montreal's downtown for four hours.

The Canadiens had to win both remaining games to earn first place. The Montreal fans wanted Richard to win the scoring championship, which put Boom Boom in a precarious position. He needed to collect points to help the Canadiens win, but if he passed the Rocket, it would infuriate the fans. "Doug Harvey told me, 'Listen. We came to win first place. You've got to score goals to help us win.' I said, 'You put the puck on my stick and if I have a chance to score, I don't care who I have to surpass. I get paid to play and score goals." Boom Boom earned a goal and two assists in the next game to put him ahead of Richard in the scoring race. The fans took a long time to forgive Geoffrion for 'stealing' the scoring championship from the idolized Richard. "I can assure you that I had more heartbreak in winning the trophy (Art Ross) than Richard had in missing it," sighs Boom Boom. "The Rocket never held a grudge against me. It wasn't my fault that Rocket got suspended." Even after Geoffrion won the Art Ross Trophy as league scoring champion in 1955, NHL First All-Star honours went to Richard, while Geoffrion only hooked up on the Second. The Canadiens fell to Detroit in the 1955 Finals.

The Montreal Canadiens proceeded to win an unprecedented five consecutive Stanley Cups between 1956 and 1960.

1961 was a career season for Geoffrion. He led the NHL in scoring for a second time, collecting the Art Ross Trophy with 95 points. Boom Boom won the Hart Trophy as the league's most valuable player, and was named to the NHL's First All-Star Team. But his most notable achievement was scoring 50 goals during the regular season; only the second player to accomplish this extraordinary feat.

Geoffrion never came close to reproducing the 60-61 season in the next three years. Injuries played a role in his lack of success, but insiders suggested he was hurt most by the fact that Jean Beliveau was named captain of the Canadiens instead of him. His slump from his great year made the Canadiens begin to look for a replacement, which they found in a young speedster nicknamed "The Roadrunner" - Yvon Cournoyer.

"After I scored 50 in '61, I got 23 goals the next two seasons and I scored 21 in 1964. Let me tell you, scoring 20 goals in the NHL then was like hitting .300 in baseball," explains Bernie. "But in 1964, they got rid of Mr. (Frank) Selke as the general manager. I went to meet with David Molson (the Canadiens' new owner). He asked me what I wanted to do when I finished playing Hockey. I told him I'd like to stay in Hockey in some capacity. He told me he'd like me to consider retiring and coach Montreal's AHL team in Quebec. He said that since my 50-goal season, I had tailed off, but sheesh, 20 goals was still pretty darned good. But he told me that if I went to Quebec for two seasons, he'd bring me to Montreal to coach the Canadiens. That sounded pretty good to me. But if I read between the lines, he just wanted to bring Yvan Cournoyer in to take my place. Hey, Yvan Cournoyer was a very, very good player but if I had realized what was going on, I would have made Yvan Cournoyer beat me for my spot instead of just handing it to him."

Geoffrion coached the Quebec Aces in the AHL for two seasons and both seasons they finished first. But the Rochester Americans best them out for the championship both years.

Geoffrion continues recalling the events. "David Molson told me I would be coaching the Montreal Canadiens, so I set up a meeting with him. But he said, 'Boom, Toe Blake is still our coach. All I've got to offer you is to coach the Junior Canadiens.' But it was $6,000 a year. I reminded him of his promise, but he just said, 'Sorry, but that's all I've got.' I was really mad. I wasted two good years, and I could have been playing. I wanted to come back. I wanted to come back to show Montreal I could still play. I knew Montreal wouldn't protect me in the draft because Yvan Cournoyer was now playing. Emile Francis from the New York Rangers picked me in the draft. I said to him, 'Where do I sign?' The Rangers hadn't made the playoffs the year before and that season, we made the playoffs. The first game I played at the Forum (in Montreal) as a New York Ranger, I scored on Charlie Hodge."

The Rangers finished fourth in 1966-67, with Geoffrion contributing 17 goals and 25 assists to the attack after not playing for two seasons. Boom Boom played one final season in New York, retiring after the 1967-68 season. His health had been troublesome and at the end of the season, a duodenal ulcer finally brought an end to the playing career of Boom Boom Geoffrion.

"Emile Francis told me that if I couldn't play, I'd be the next coach of the New York Rangers." Francis had been coach and general manager for the previous two seasons. Geoffrion coached the Rangers for part of the 1968-69 season, but health problems forced him out of the job part way through the season.

In 1972, general manager Cliff Fletcher hired the effervescent Geoffrion to coach the expansion Atlanta Flames. In just their second year of existence, the Flames made the playoffs, but Boom Boom found his health affected and resigned in the midst of his third season. "I loved Atlanta. I loved everything about Atlanta. I still live there today. My kids are here and my grandkids are here. We all just love it here."

In 1979, Montreal was coming off a Stanley Cup win but Scotty Bowman, who had been the coach, wanted the opportunity to be general manager of the Canadiens. Without such a vacancy, Bowman left to be coach and general manager of the Buffalo Sabres. The call that Bernard Geoffrion had waited 15 years for finally came. "Irving Grundman called me and asked me how I'd like to coach the Montreal Canadiens. It would be a dream come true. I had grown up in Montreal and the Canadiens were my team. I played junior in Montreal looking ahead to wearing le bleu, blanc et rouge of les Canadiens. I had a lot of success as a member of les Canadiens. And when I left as a player, it was so someday I could coach the Canadiens. But it didn't happen. And now I was getting a chance," states Geoffrion. But coaching the Montreal Canadiens wasn't all that Boom Boom had dreamed about. "I had three guys telling me what moves to make. How can you coach like that? It's impossible." Toe Blake was Vice President of Hockey and traveled with the team. Claude Ruel was a coaching advisor while general manager Irving Grundman also offered his input. "But it wasn't just me - the Montreal Canadiens were unfair to my son Danny. He had been a first round draft pick of the Canadiens and they wouldn't let me play him. He was as good as just about any player on that team but they made me leave him on the bench. I had dreamed about coaching the Montreal Canadiens, but it was a nightmare." After 30 games, and with the team in first place, Bernie 'Boom Boom' Geoffrion resigned as coach of the Montreal Canadiens.

The Canadiens announced on October 15, 2005, that Geoffrion's uniform number 5 would be retired on March 11, 2006. On March 8, Geoffrion was diagnosed with stomach cancer after a surgical procedure uncovered it. Doctors attempted to remove the tumour, but found that the cancer had spread. Geoffrion died in Atlanta, Georgia, on March 11, the day his jersey number was to be retired. At his insistence, things went ahead, with family, friends and 21,000 fans celebrating “Boom Boom’s” memory as his number 5 was raised to the rafters of the Bell Centre.

During his remarks at the pre-game retirement ceremony, Geoffrion's son Bob recounted how his parents had once gone to a boxing match at the Montreal Forum and that Geoffrion had told his wife Marlene (Geoffrion's widow Marlene is the daughter of fellow Hockey Hall of Famer Howie Morenz and the granddaughter of the sister of the wife of Billy Coutu) that his own number would someday hang from the rafters beside that of her father, Howie Morenz. Fulfilling that prophecy, and in further recognition of the special link between the Morenz and Geoffrion families, the two numbers were raised side by side (Morenz's banner was lowered halfway and was raised back up to the rafters with Geoffrion's banner).