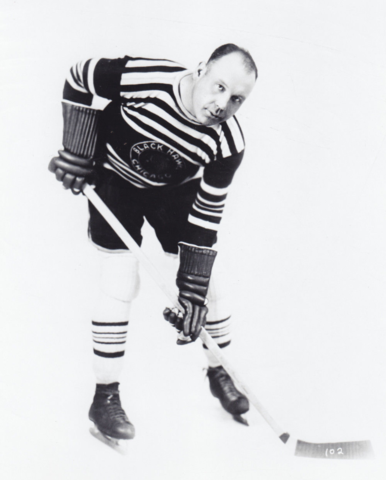 Abel did not play his first organized Hockey game until he was 18 years old. He spent four seasons learning the game with the Michigan Soo Nationals of the state senior league, and in 1922 he joined the St. Paul Athletic Club, a Minnesota team that played in the United States Amateur Hockey Association. His solid play and size earned him a berth on the U.S. Olympic team that traveled to the 1924 Winter Games in Chamonix, France.

His reputation buoyed by his silver-medal performance, Abel joined the Minneapolis Millers of the competitive Central Hockey League for the 1925'26 seasonn and was named to the CHL's First All-Star team at the defence position.

Abel played in the NHL for eight years, and was the first United States-born player to become a NHL regular. When the New York Rangers were formed in 1926, Abel was signed by Conn Smythe to the Rangers, largely based upon his strong performance at the Winter Olympics in 1924. With the Rangers, he wore sweater number 4, and, paired with defenceman Ching Johnson, was a key member of the Stanley Cup winning Rangers team in 1927-28. In the 1928 Stanley Cup playoffs defense became especially important to the Rangers when their goalie, Lorne Chabot, was injured in the second game of the finals against the Montreal Maroons. New York's 45-year-old manager and coach, Lester Patrick, put on the pads and filled in for Chabot ' despite never having played goal in the NHL before. With Abel and Johnson clearing the zone and protecting their inexperienced netminder, the Rangers won the game and eventually the Stanley Cup.

After the 1929 season, Abel's rights were sold to the Chicago Black Hawks for $15,000. He became a fan favorite in Chicago and was a defensive stalwart for the Black Hawks for five seasons, wearing sweater number 2. Abel was a member of the 1st Stanley Cup champion Black Hawks in 1933-34, and his last NHL season.

When the United States Hockey Hall of Fame opened in 1973, Taffy Abel was one of its charter members.