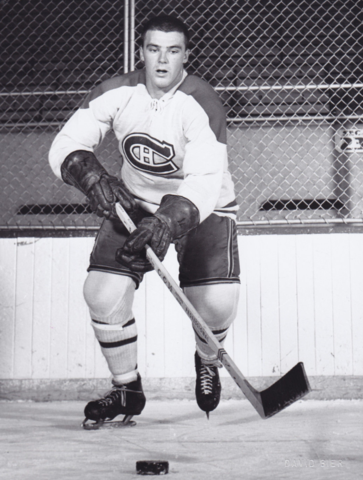 After scoring 34 points for the Shawinigan Cataracts, now in the QHL in 1954-55, the talented rearguard was placed on the QHL's first all-star team.

Talbot then gained a regular job on the Montreal Canadiens' blueline in 1955-56 season and enjoyed Stanley Cup success in each of his first five NHL seasons, a feat shared only by teammates Henri Richard, Claude Provost and Bob Turner. Led by Rocket Richard and Jean Beliveau, the Montreal Canadiens won the first of five consecutive Stanley Cup championships in 1955-56.

Talbot broke in as the Habs No. 5 defenseman and had great blueline role models in Doug Harvey, Butch Bouchard and Dollard St. Laurent. He was known for physical play and being an adept passer from Day 1.

Talbot was an integral part of the Canadiens transition game until 1966-67. His consistent play at both ends of the ice was crucial when the Canadiens had to replace the likes of Rocket Richard, Doug Harvey, and Bernie Geoffrion. After scoring 47 points in 1961-62, Talbot was voted on to the NHL first all-star team, and was selected for five all-star games in all (1957, 1960, 1962, 1965 and 1967). Talbot also played an important role on Stanley Cup championship teams in 1965 and 1966.

When the Canadiens wanted to go with younger players like Serge Savard, he was left unprotected in the 1967 Expansion Draft. The Minnesota North Stars called his name in the draft, but ended up trading him to the Detroit Red Wings four games into the 1967-68 season. Before the end of the regular schedule, Talbot was picked up by the St. Louis Blues. His puck handling and experience helped the club reach the Stanley Cup final three straight years beginning in 1968.

Talbot retired in 1971 after lending his expertise to the young defence on the expansion Buffalo Sabres.