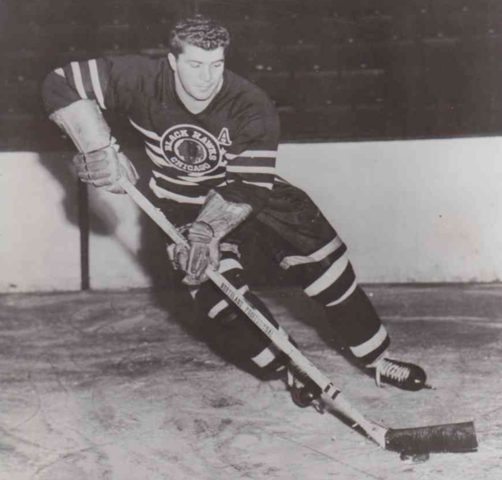 Guidolin played his junior Hockey with the Oshawa Generals of the OHA, playing in the Memorial Cup in 1942. Later that year he became the youngest player ever (16 years, 11 months) to play in an NHL game, on November 12, 1942.

The Boston Bruins were in dire need of replacements to fill the roster holes created by so many players leaving for military service. Young Guidolin filled the bill with some surprising success.

Due to war-time player shortages the Bruins used several youngsters that season. Guidolin played on a line with 17 year old Don Gallinger and 20 year old Bill Shill. With the famed "Kraut Line" of Milt Schmidt, Woody Dumart and Bobby Bauer absent from the Bruins line up due to war commitments, the Boston press was quick to dub the rookie line as the "Sprout Line."

In his second season, he tallied 42 points in 47 games. By then he'd become known in the NHL as "Bep" because broadcaster Foster Hewitt called him that when he learned of his nickname "Bep" because his mother spoke Italian and very little English. Armand was the baby of the family and his mother pronounced baby as "beppy". The nickname stuck and was shortened to "Bep".

In 1944, his eligibility for military service brought a one-year break from his NHL career.

In 1945, Guidolin picked up where he left off this time against stronger lineups across the league. But his 175-pounds of raw muscle was up to the task. He continued to score at a respectable pace for two more seasons with the Bruins before trades took him to the Detroit Red Wings and on the his final NHL stop in Chicago with the Black Hawks.

With the Blackhawks, Guidolin put up his best single-season numbers, netting 17 goals and 34 assist. But his ardent support for the formation of a player's union brought on an early demise to his tenure in the NHL.

In 1952, he embarked on a lengthy stay in the minors, skating for seven different teams over nine years, including the AHL Syracuse Warriors and the QSHL / QHL Ottawa Senators.

By 1956, Guidolin was reinstated as an amateur in Canada and helped the Belleville McFarlands win the 1958 Allan Cup.

He then retired from the ice in 1961 to launch a coaching career. In 1965 he became the coach of his former junior team the Oshawa Generals, featuring 17-year-old future Hockey Hall of Fame defenceman Bobby Orr. He led the Generals to the Memorial Cup final in 1966 versus the Edmonton Oil Kings. Guidolin later coached the London Knights of the OHL from 1969 to 1971.

In 1971 Bep was called upon by the Bruins to coach their new farm team in the AHL - the Boston Braves. Guidolin did an incredible job. His teams were extremely well conditioned, disciplined and aggressive. In his first year as coach the Braves were the best team in their division by far.

In the middle of his second season with the Braves Bep was rewarded for his work by getting the call to step behind the Bruins bench, as Tom Johnson's successor.

Bep was not exactly popular with the players. He ran exhausting practices with relentless drills. He'd keep the whole team working until he was convinced every player had worked his butt off. The results were incredible - In 104 regular season games he had a coaching record of 72-23-9, well over .730 winning percentage!

The Bruins players hated playing for him, particularly Phil Esposito and Derek Sanderson, who both had bitter feuds with him. In the playoffs when the Bruins became the first original six team to lose to an expansion club in the Stanley Cup finals, the Bruins used that to release Guidolin.