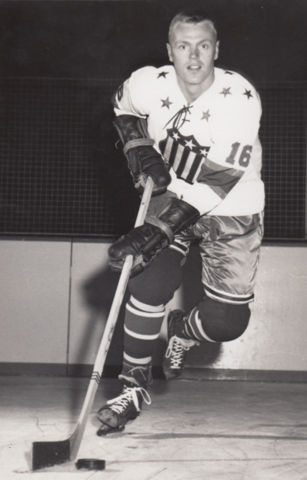 Hoekstra played junior Hockey with the Weston Wildcats and the St. Boniface Canadians, helping the Canadians to the 1953 Memorial Cup final, where he scored 16 points in 17 playoff games.

The following season he was a member of St. Catherines Teepees who won the 1954 Memorial Cup championship. Hoekstra scored 12 points in 14 playoff games.

Hoekstra turned pro and started the 1954-55 season with the with the Quebec Hockey League / QHL's Montreal Royals.

Hoekstra then joined the Winnipeg Warriors of the Western Hockey League / WHL to start the 1955 season, where he was present during the grand opening of Winnipeg Arena, which occurred on October 18, 1955. During the Warriors' WHL season opening game against the Calgary Stampeders (Hockey) club. The ceremonial faceoff, conducted by John Draper Perrin, Sr., President of the Warriors, occurred before a standing room crowd of 9,671 fans, the largest in WHL history. Captained by Fred Shero and including players such as Hockey Hall of Fame member Bill Mosienko, as well as Eric Nesterenko, Danny Summers, Gary Aldcorn, Cec Hoekstra, Fred Burchell, Bill Burega, Barry Cullen, Mickey Keating, Eddie Mazur and Ed Chadwick.

Hoekstra played 2 seasons for the Warriors before returning to the Montreal Royals in 1957, but was soon signed by the American Hockey League / AHL Rochester Americans.

Hoekstra played in Rochester until 1960, and in 1959, was called up to the Montreal Canadiens for a 4 game stint.

Hoakstra finished his Hockey career with the Galt Hornets, winning the Allan Cup championship in 1971.