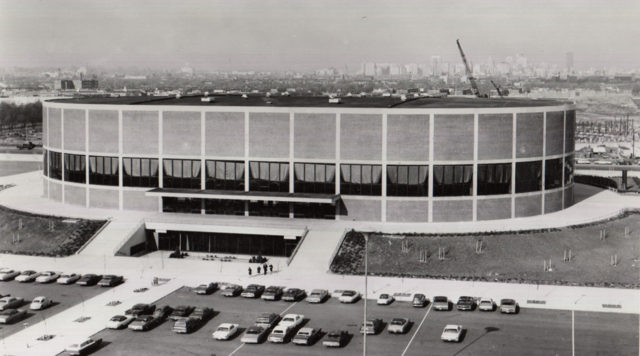 Opened as the Spectrum in fall 1967, Philadelphia's first modern indoor sports arena was built to be the home of the expansion Philadelphia Flyers of the NHL, and also to accommodate the existing Philadelphia 76ers of the NBA.

The Flyers made their home debut in front of a crowd of 7,812, shutting out their intrastate rivals, the Pittsburgh Penguins, 1–0 on October 19, 1967. Bill Sutherland scored the arena's first goal.

On December 11, 1969, the Flyers introduced what became one of the team's best-known traditions: playing a recording of Kate Smith singing "God Bless America" instead of "The Star-Spangled Banner" before important games. The perception was that the team was more successful on these occasions, so the tradition grew.

The Flyers won their first Stanley Cup at the Spectrum on May 19, 1974, defeating the Boston Bruins, 1–0, in Game 6 of the Stanley Cup Finals in front of a then-capacity crowd of 17,007. Perhaps the most important and emotional Hockey game—or sporting event of any kind.

The 1975 Stanley Cup Finals championship series was played by the Buffalo Sabres and the defending champion Philadelphia Flyers. The Flyers would win the best-of-seven series four games to two. The 1975 Flyers are the last Stanley Cup championship team to be composed solely of Canadian-born players.

On January 11, 1976, the Flyers became the first NHL team to defeat (by 4–1) the vaunted Hockey team of the Soviet Central Red Army (ЦСКА).

Two games in the inaugural Canada Cup Hockey tournament were also held at the Spectrum in September of that year, as the U.S. took on Czechoslovakia and the USSR.

The Philadelphia Phantoms made its Spectrum debut on October 6, 1996 before an enthusiastic crowd of 9,166 which saw them defeat the visiting Rochester Americans 3–1 in the first regular season AHL game played in Philadelphia. By season's end, the Phantoms had compiled a 49–18–3–10 record for a League-best 111 points, ten more than second overall Hershey's 101. Center Peter White captured the Sollenberger Trophy as the AHL's top scorer with 105 points.

After sweeping aside the Baltimore Bandits in three games in the opening round of their first-ever playoffs, the Phantoms then met their now already archrivals, the Hershey Bears, in a most eventful best-of-seven second round set. After dropping the opening game 5–3, the Phantoms evened the series with a 7–4 victory in a most memorable Game 2 which featured, among other things, 350 minutes in penalties (171 to the Phantoms), 14 game misconducts, a pair of suspensions, a one-sided fight in which goaltender Neil Little knocked-out Bears' backup goaltender Sinuhe Wallinheimo and, most unusual of all, the appearance in the game of no less than five goalies (Jean-Francois Labbe, Wallinheimo and Sylvain Rodrigue for Hershey; Little and Dominic Roussel for Philadelphia). After dropping Game 6, 3–2, in a marathon affair at Hershey that ended when Blair Atcheynum slipped the Bears' 57th shot of the night (and the 121st overall by both teams) behind Little on a breakaway at :42 of the third overtime, the Phantoms' first season came to an end when Hershey edged them again, 3–2, in Game 7 at the Spectrum three nights later on May 14. (Hershey went on to win their eighth Calder Cup title a few weeks later.)

As in their inaugural season, the Phantoms again finished first overall in 1997–98 with 106 points on a record of 47–23–2–10, and again Peter White took home the Sollenberger Trophy as the league's top scorer with another 105-point season. Sell-out crowds of 17,380 also packed the Spectrum eight times during the regular season schedule with a total season attendance of 472,392, and over 100,000 more attended the club’s home Calder Cup games during which the Phantoms played and defeated the Rochester Americans, Hershey Bears, Albany River Rats and Saint John Flames.

A crowd of 17,380 (the club's ninth sell-out of the year) filled the Spectrum on the evening of June 10, 1998, for Game 6 of the finals that saw the Phantoms play a virtually flawless contest as they defeated the Flames 6–1 behind the stellar goaltending of Neil Little, who had allowed just 48 post-season goals on his way to a 15–5 playoff record. Winger Mike Maneluk earned the Jack A. Butterfield Trophy as the playoff MVP while also being the League's leading post-season scorer with 34 points (13 goals and 21 assists).

Team captain John Stevens (who had also won Calder Cups with Hershey in 1988 and Springfield in 1991, and would coach the Phantoms to another title in 2005) and his teammates paraded the Calder Cup around the same ice as the Flyers had skated their first Stanley Cup 24 years earlier.

The Spectrum is the only venue to host the NBA and NHL All-Star Games in the same season, doing so in 1976, when it also hosted that year's Final Four. It is also one of a handful of venues to host the Stanley Cup and NBA Finals at the same time, doing so in 1980.

The Spectrum, along with the Met Center and The Forum, was one of the first sports arenas to have a scoreboard with a messageboard. Furthermore, the messageboards on the Spectrum scoreboard were the first dot matrix screens in pro Hockey or basketball, capable of photos, animation, and replays as well as messages.

Lou Scheinfeld, former President of the Spectrum, explained that the name "Spectrum" was selected to evoke the broad range of events to be held there. "The 'SP' for 'sports' and 'South Philadelphia,' 'E' for 'entertainment,' 'C' for 'circuses,' 'T' for 'theatricals,' 'R' for 'recreation,' and 'UM' as 'um, what a nice building!"