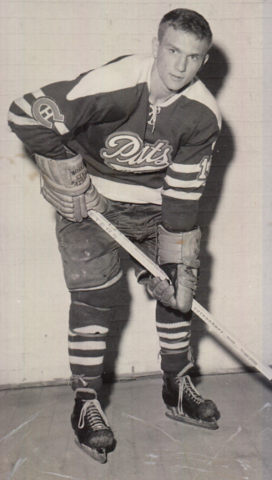 Peters played his junior Hockey with the Regina Pats of the SJHL where he stood out from the crowd as a league leader in assists and points in 1961-62 winning the league scoring title, was team captain twice, and won the league's most valuable player award another season.

As a prospect in the Montreal Canadiens' system, Peters turned pro, and was sent to play for the Omaha Knights where he won CHL Rookie of the Year honours (Ken McKenzie Trophy) along with Poul Popiel in 1964.

Shortly thereafter, Montreal traded Peters along with Cesare Maniago to the New York Rangers. There, Peters picked up his first full season as an NHLer and established himself as an effective defensive forward.

Montreal then re-acquired Peters prior to the 1966-67 season, giving him a four-game tryout before putting him away in storage with the Houston Apollos of the CHL. But the NHL's first major expansion made it difficult for clubs like the Canadiens to continue hiding their talent in the minors. Peters was subsequently picked up by the fledgling Philadelphia Flyers who gave him a four-year, full-time stint at the NHL level. Peters scored a few goals and assists each year while doing his best to inhibit the onslaught of opposition coming from the more established clubs across the league.

Peters joined the Boston Bruins in the Intra-League Draft in 1971-72, and was the most valuable player (Les Cunningham Award) at their American Hockey League farm team, the Boston Braves, but was called up near the end of the season. He injured his knee during the playoffs where the Bruins won the 1972 Stanley Cup. Peters qualified to have his name on the Stanley Cup, but was left off.

Peters played with the Saskatoon Old Pros and also played with the Montreal Canadien Old timers in many of their exhibition games for 20 years. With the Old timers, most of the proceeds went to charity, like the Special Olympics, and he was also the key organizer of a dinner in honor of former teammate Dave Balon, who received a van from the Canadiens to help him cope with his muscular sclerosis.