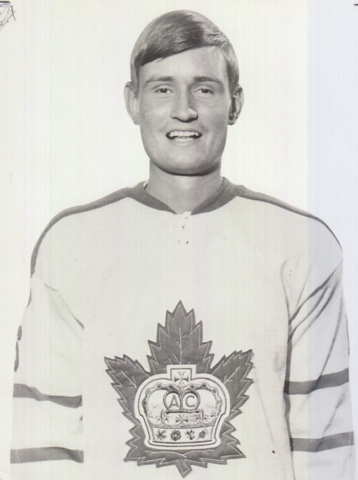 Imlach moved to Toronto and played for the Neil McNeil Maroons of the Metro Toronto Junior "B" League. He later excelled with the Toronto Marlboros and received a brief recall to the Toronto Maple Leafs in January 1966 to replace the injured Wally Boyer.

The next stop was London, Ontario where Imlach enrolled at the University of Western Ontario and played with the Knights of the OHA.

His father was a huge influence in terms of encouraging him to keep up with his high school work in junior and complete a university education later. In the fall of 1967 he suited up for the Mustangs where he enjoyed two fine seasons before transferring to the University of Toronto and York. Partway through his college career he rejected a pro contract with the Maple Leafs because he didn't think his father was offering enough money. Toronto traded his rights to his father who was the general manager and coach of the expansion Buffalo Sabres, but he never played a game for the young club.

Brent admitted playing for his dad was very difficult.

"I didn't want to play because everybody was going to think the only reason I was on the team was because of my dad. Even I wondered if I was there as a spy. It bothered me. But I wasn't going to let my dad down when they called me up. You might have wished for different circumstances. But now, I wouldn't trade it for anything."