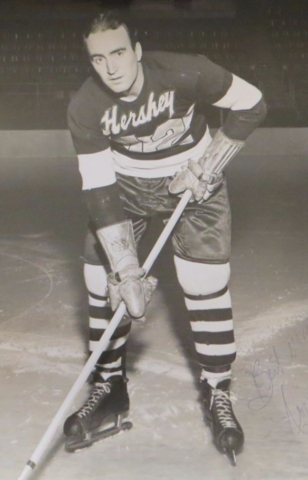 Larson played junior with the local Moose Jaw Canucks in 1937-38. He then spent two years with the senior Moose Jaw Millers before joining the New York Americans on a full time basis in 1940. Larson was used in a more defensive role as a rookie in 1940-41 but chipped in with 16 goals the next season when playing for the now named Brooklyn Americans, and teamed with John Sorrell and Ralph Wycherley. This represented the pinnacle of his big league career.

Larson then played mostly in the Thunder Bay Senior Hockey League in the mid-40s and returned for one more NHL game with the New York Rangers in 1946-47. He was a solid two-way worker for the AHL's Hershey Bears in the late 40s before joining the senior Calgary Stampeders in 1950-51. Larson retired in 1956 after accumulating 68 goals in three seasons for the Kimberley Dynamiters of the senior Western International league.