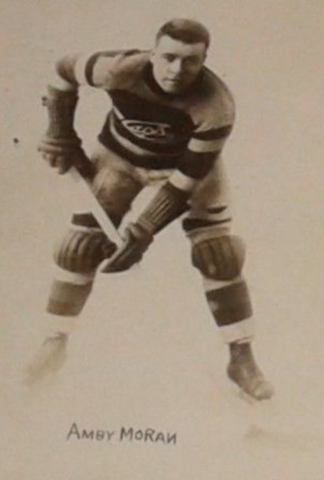 Moran play all his junior Hockey in Winnipeg, moving up to play for the Winnipeg Winnipegs in 1919-20, and then played with the Brandon Wheat Cities / Brandon Elks, who played in the Allan Cup in 1921. The next four years of his career was with the Regina Capitals of the WCHL.

Moran saw his first NHL action in 1926-27 when he appeared in 12 games with the Montreal Canadiens, playing along side Canadiens legends Morenz and Joliat. Moran continued this season with the New Haven Eagles and the Moose Jaw Maroons.

Moran played another 23 games in the NHL, this time for the Chicago Black Hawks during the 1927-28 season.

Moran finished off his pro Hockey career in the American Hockey League from 1928 to 1930 with the Tulsa Oilers, St. Louis Flyers and the Buffalo Majors