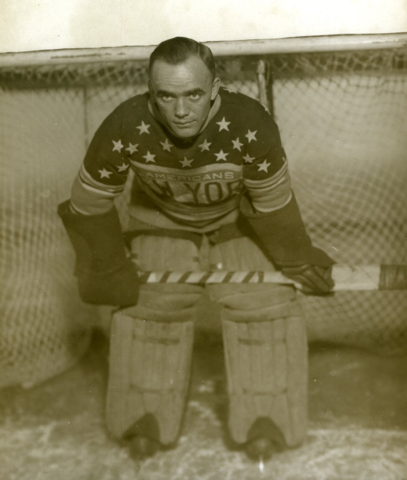 Worters grew up in Toronto playing Hockey and baseball, and played his junior Hockey for the Parkdale Canoe Club Hockey team, with his final season there in 1918-19. The next season, Worters would join the Toronto Canoe Club Paddlers Hockey team to start the 1919-20 season, and would backstop the team to the 1920 OHA George Richardson Memorial Trophy championship, and their 1920 Memorial Cup championship on March 25, played in his hometown of Toronto.

Leaving town for a year in 1920-21, he turned in a strong performance in Northern Ontario with the Porcupine Gold Miners, going 7-2-1, and then joining some of his old teammates with the Toronto Aura Lee Hockey Club, and help backstop them to the 1921 S.P.A. / Sportsmen's Patriotic Association Tournament Championship. The Toronto Aura Lee, played at the Arena Gardens in Toronto.

Worters was involved in a high sticking incident, that resulted in him being suspended for the entire 1921-22 season.

Worters returned to the ice in 1922-23 playing for the Toronto Argonauts of the Ontario Hockey Association in senior Hockey.

Worters moved to the United States for the 1923-24 season, his first of two with the Pittsburgh Yellow Jackets of the United States Amateur Hockey Association / USAHA, where he continued his dominant ways, reeling off a 15-5 record with 7 shutouts and a stellar 1.23 goals against average during the regular season and a 9-3-1 playoff record, highlighted by an even better 0.86 goals against average thanks to his 5 playoff shutouts on the way to the United States Hockey championship. Pittsburgh defeated the Boston Athletic Association to win Fellowes Cup 4 games to 1.

The 1924-25 season saw Worters return to the Yellow Jackets, going 25-10-4 with a 0.81 goals against average followed by a 6-1-1 playoff mark and a second consecutive U.S. national championship, the 1925 Fellowes Cup champions.

Bolstered by the Yellow Jackets success, the expansion Pittsburgh Pirates joined the NHL the following season, with Worters in goal and substantially the same lineup as the Yellow Jackets. The Pirates would become the NHL’s third U.S.-based team on November 7, 1925 in joining the New York Americans and the Boston Bruins.

Worters excelled in goal to keep the Pirates competitive, as evidenced by his 7 shutouts and 1.90 goals against average in 35 games which allowed the first year club to be one of only three of the seven teams to advance to the playoffs.

Worters made an ever-lasting impression on the New York Americans brass on December 26, 1926. The Pirates and Americans set an NHL record by combining for 141 shots. The Americans won the game 3-1 as New York had 73 shots and Pittsburgh had 68. Roy Worters made 70 saves for the Pirates and Jake Forbes made 67 saves for NY in a 3-1 New York victory.

Worters proved an iron man, The man they called "Shrimp" played three seasons for the Pirates and in virtually all of their games, showing great skill while backstopping a weak defensive team.

Prior to the 1928-29 season, Worters rejected the Pirates' contract offer, prompting NHL president Frank Calder to suspend the diminutive netminder. A trade to the New York Americans resolved the issue, and Worters would spend the rest of his pro career - (save for a single game on loan to the Canadiens on February 27, 1930 to fill in for an injured George Hainsworth, which Montreal won 6-2) - in the Big Apple. Over a nine-year span, the Americans qualified for the post-season only twice. One of those playoff appearances came in Worters' first year, recording a second place overall record in the Canadian Division of 16-12-10, 13 shutouts , and he registered a 1.15 goals-against average to elevate the play of a team that had finished in last place the year before. His heroics made Worters the first goalie to win the Hart Trophy as the league's most valuable player.

Worters became the first goalie in NHL history to record back to back shutouts in his first two games for a new team.

During his stint with the New York Americans he had a corps of large defencemen to guard him, such as former teammate Lionel Conacher - who grew up in the same Toronto neighbourhood as Worters - Bullet Joe Simpson and "Red" Dutton. However, the perennially-weak Americans would make the playoffs only once more during Worters' career, although he would win the Vezina Trophy in 1930–31 as the league's best goaltender, as he led all NHL netminders with a 1.61 goals-against mark.

During the ensuing contract negotiations with the Americans, his legend grew when he demanded - and received - $8,500 per season, an enormous sum for a goalie at that time. What made this coup all the more remarkable was that he'd out-bargained Americans' owner Bill Dwyer, a notorious bootlegger who continually defied the U.S. Prohibition laws.

Even though the Americans remained weak, Worters continued to rack up shutouts and keep his goals-against mark respectable. He was placed on the NHL Second All-Star Team in 1932 and 1934.

He retired after the 1936-37 season. Gritty to the end, he refused to take himself out of the lineup in his final days even though he was suffering from a painful hernia. He never played on any powerhouses, which made his 67 shutouts, 171 wins and his durability all the more impressive.

While with the Americans, Worters was named team captain for the 1932–33 season.

Worters also is known as a goaltending innovator. He was the first goalie to really use the blocker as a tactic. In those days the blocker was really just a heavily padded glove, but he was the first to use that hand to deflect shots into the corner as opposed to trying to catch them. His 5' 3" height also made him the shortest player in NHL history.

Ray Worters was inducted into the Hockey Hall of Fame in 1969.