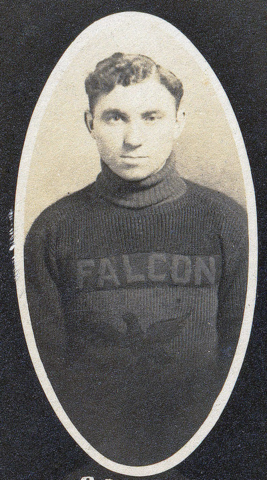 Cumbers grew up in New Iceland (Lake Winnipeg), and learned to play Hockey with the local Icelandic players.

Cumbers had worked as a locomotive engineer in peacetime and served with the No. 13 Light Railway Operating Company overseas of the Canadian Railway Troops, servicing locomotive engines on military railways.

Cumbers was killed by a German artillery shell on the morning of March 28, 1918, at Maroeuil, France, about eight kilometres southwest of Vimy Ridge.

Among the nearly 61,000 Canadians killed during the conflict were two early Falcons: Frank ‘Buster’ Thorsteinson and George Cumbers, best friends and players during the 1914 - 15 season, were separately killed in action in March 1918, and are laid to rest in the same row at Barlin Communal Cemetery.