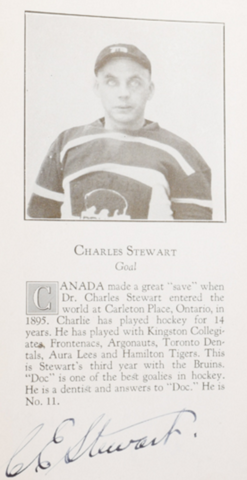 Stewart played junior with Kingston Collegiate Institute squad and the local Frontenacs. He then spent several years with the senior Toronto Argonauts, Toronto Dentals for four seasons while undergoing medical training, being named to the league's Second All-Star Team in 1918 and the First All-Star Team in 1919. During that time, he enlisted in the Canadian Army Dental Corps in 1917, being commissioned as a lieutenant, and assigned to Battalion M. D. No. 2; he did not see overseas service before war's end.

Doc Stewart also played for the Toronto Aura Lee in 1921, winning the S.P.A. / Sportsmen's Patriotic Association Tournament, and the Hamilton Tigers from 1922 to 1924.
Four times Stewart led all OHA senior netminders in wins, and with the Tigers' senior team in 1922, 1923 and 1924, Stewart was named the First Team All-Star goaltender all three seasons.

The Boston Bruins began play in 1924 and losing eight of their first nine games, often by wide margins, and desperate for goaltending, signed Stewart to a contract. He played the rest of the schedule for Boston, winning five out of twenty-one games for the weak club, adding two shutouts. He remained the Bruins' goaltender for two more seasons, his best record coming in 1926, when he had a 16-14-4 record with six shutouts and a 2.21 goals against average.

Late in the 1927 season, the Bruins loaned Stewart to the Hamilton Tigers of the Canadian-American Hockey League, with whom he played nine games to finish his Hockey career.

Stewart finished his NHL career with a 30-41-5 record and ten shutouts in 77 games, recording a 2.45 goals against average.

Stewart's career goals against average is fifth best in Boston Bruins' history for any goaltender playing 75 games or more.