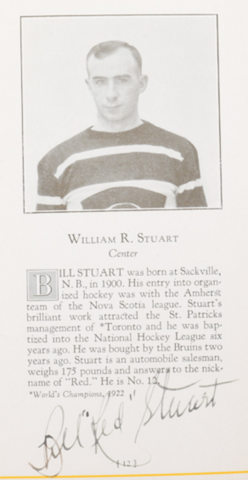 The Toronto St. Pats signed him on January 5, 1920, and Stuart made his NHL debut in the 1921-22 season and saw his first action in the Stanley Cup playoffs. The next year, Stuart won his first and only championship while helping Toronto claim its second Cup in 1922. Stuart played four seasons with the St. Pats, and started a fifth before being traded to the Boston Bruins in December 1924.

Stuart played three seasons for the Bruins before being traded to the Minneapolis Millers (AHA) by Boston with cash and future considerations for Nobby Clark and Norm Gainor, October 24, 1927.