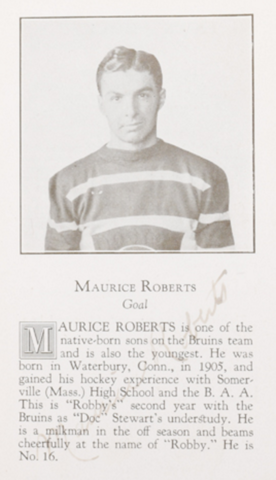 Roberts was the oldest man ever to play the position of goaltender in National Hockey League history.

Roberts was both the oldest player ever to play a NHL game and the youngest man ever to play goal in the NHL.

Roberts played a total of ten games in the NHL with the Boston Bruins, New York Americans, and Chicago Black Hawks, as well as playing sixteen seasons in the minor leagues, most notably for the Cleveland Barons and the New Haven Eagles. His career was interrupted for four seasons after he enlisted in the United States Navy during World War II. After the war, he played only one more regular season of professional Hockey.

Roberts made his NHL debut with the Boston Bruins on December 8, 1925, substituting for injured regular Doc Stewart in a 3-2 win against the Montreal Maroons; at age 19, he was the youngest goaltender in NHL history, until surpassed by Harry Lumley nearly twenty years later.

On November 25, 1951, Roberts—then an assistant trainer with the Chicago Black Hawks—had to finish the third period for the injured Lumley, at that point the Black Hawks' starter. Although Roberts didn't yield a goal, his Hawks still fell to the Detroit Red Wings, 5-2. The then 45-year-old Roberts, in his last NHL game, became the oldest player ever to play in an NHL game; a record he held until broken by Gordie Howe in 1979, and also passed by Chris Chelios. He remains the oldest goaltender to play in an NHL game. He also was the final NHL player who was active in the 1920s.