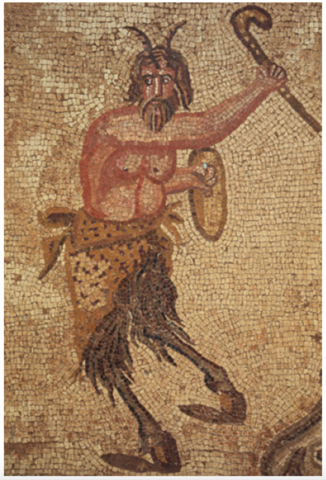 Ancient mosaic from a Roman villa in the Archaelogical Gardens at Paphos, Cyprus.
It stems from the 3rd century AD

In Greek religion and mythology, Pan is the god of the wild, shepherds and flocks, nature of mountain wilds and rustic music, and companion of the nymphs. His name originates within the Ancient Greek language, from the word paein (πάειν), meaning "to pasture." He has the hindquarters, legs, and horns of a goat, in the same manner as a faun or satyr. With his homeland in rustic Arcadia,

Pan is also recognized as the god of fields, groves, and wooded glens; because of this, Pan is connected to fertility and the season of spring. The ancient Greeks also considered Pan to be the god of theatrical criticism.