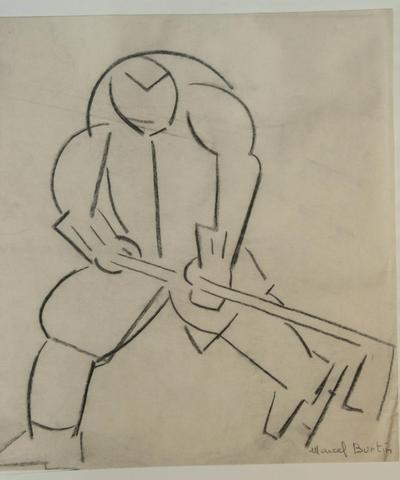 Marcel Burtin was born in Gafsa, Tunisia in 1902 and moved to Paris in 1911 with his parents. His first job was as a seaman, followed by a period working for the car company Renault.

However, in 1932 he met the artist Edouard Pignon (1904 - 1993), and following his advice began to draw and paint. From 1940 onwards he exhibited with the Groupe de la Jeune Peinture, whose members included Pierre Tal Coat (1905 – 1985), and Edouard Pignon, and during this period he met and befriended Picasso.

Marcel Burtin’s early paintings before the Second World War demonstrate a Cubist influence, drawing on the work of Georges Braque, Henri Matisse and Picasso. After the War he abandoned the Cubist influence in favour of powerful abstract paintings full of colour and vitality.

Passionate about sport, he made it one of his recurrent themes, including Hockey, polo, cycling, and horse racing.