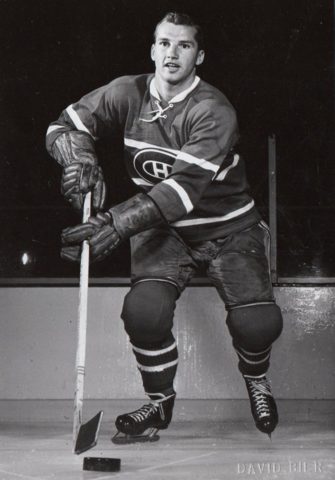 When Marshall turned pro in 1952, he kept up the same tradition in the minors while skating for the Cincinnati Mohawks of the IHL, the Buffalo Bisons of the AHL, and the Montreal Royals of the QHL.

Midway into the 1954-55 campaign, the Canadiens summoned him to join their ranks. The problem the winger faced, however, was that the Canadiens were already thoroughly stocked with offensively skilled forwards. As such, Marshall's new role would be defensive in nature, an assignment he disliked although he never complained openly.

it wasn't until 1955-56 that Marshall played his first full season in the NHL. It was great timing on Marshall's behalf too, as it marked the first of five consecutive years that the Canadiens would win the Stanley Cup. Marshall quietly worked on the third and fourth line as a defensive checker and penalty killer. His thankless work was a big part of the Canadiens success.

Though he had the skills to be a front line player, Marshall never once complained about taking a checking role on the great Montreal Canadiens teams of the 1950s that won 5 consecutive Stanley Cups. A swift skater who would never allow himself to be outworked, Marshall was extremely consistent.

His hard work did not go unnoticed around the rest of the league. Throughout their championship reign Marshall's name came up often in trade talks. It wasn't until 1963 that the Canadiens traded Marshall in a blockbuster deal with the New York Rangers. Marshall, Phil Goyette and Jacques Plante were sent to the Big Apple in exchange for Dave Balon, Leon Rochefort, Len Ronson and Gump Worsley.

Marshall continued to be a top penalty killer in New York but also received more ice time and therefore a more offensive role. Four times in 5 seasons with the Blue-shirts Marshall scored more than 20 goals. In all, Marshall put in seven seasons with the Blueshirts and enjoyed his most prolific offensive phase. In 1965-66, he netted a personal-best 26 goals and 28 assists within the context of some very solid defensive play. In 1966-67 he scored 24 goals and 46 points and was named to the NHL Second All Star team.

Following an injury filled 1969-70 season the Rangers exposed Marshall in the expansion draft where the Buffalo Sabres eagerly snapped up the veteran. He scored 20 goals and 49 points for the Sabres.

In spite of his contribution, the aging winger was left up for grabs in the Intra-League Draft of 1971. The Maple Leafs took advantage by bringing him to the Gardens for one final season. During his last run, he performed as a steady, reliable veteran who had the versatility to plug holes and provide a calming influence on the sometimes rattled atmosphere in Maple Leaf Gardens. He scored just twice in 50 games. At the close of the season, Marshall packed it in for good..

After retiring, Marshall became a regular commentator on Hockey Night In Canada.