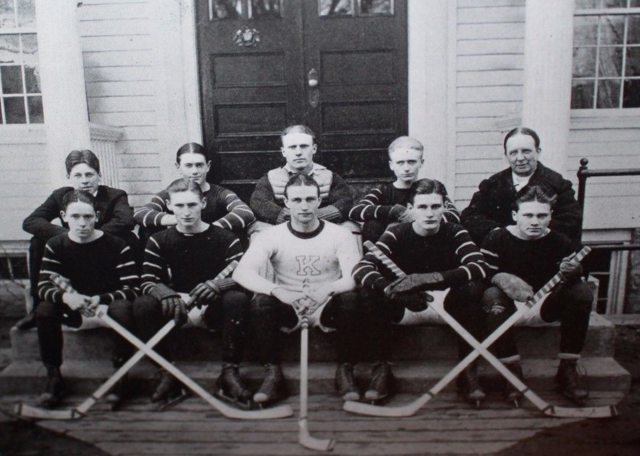 Kent's hockey tradition began on a flooded field that had frozen over in 1910 and has continued until today with over 100 seasons. The team and the program have come a long way in that time, too. The first team consisted of only eight players who, after some practice, borrowed some football pants to play their first game against the Berkshire School, a team that Kent continues to compete against today. In the following seasons, the team would clear an area next to Macedonia Brook that would flood and freeze over, calling it Pater's Pond for the school's headmaster and founder. This makeshift rink is still used for Pond Hockey games today. Eventually, the school built its first proper hockey rink, the Manuel Nadal Rink, naming it for the team's first coach. When girls began coming to Kent, they started their own hockey program and the two teams have shared the Nadal Rink ever since. Nowadays, both the girls and boys teams compete in the Founders League, noted as one of the most competitive high school leagues in the country, and have had many successes, with each team winning the 2014 Founders League Championship.