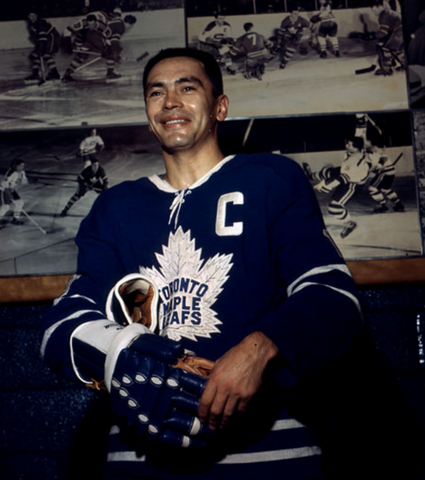 While attending Sudbury High School, Armstrong played on the Hockey team with Red McCarthy and Tim Horton. Inspired by a newspaper advertisement offering tryouts with the Copper Cliff Redmen of the Northern Ontario Junior Hockey Association (NOJHA), Armstrong convinced Horton and McCarthy to join him in trying out. They made the team and Armstrong began his junior Hockey career at age 16 in the 1946–47 season. He recorded six goals and five assists in nine games and caught the attention of scouts for the National Hockey League (NHL)'s Toronto Maple Leafs who added him to their protected list. He also played with the Prince Albert Blackhawks for part of that season.

The Maple Leafs briefly recalled Armstrong during the 1949–50 season and he made his NHL debut on December 3, 1949. He appeared in two games before returning to the Marlboros. In the 1950 Allan Cup playdowns, he recorded 19 goals and 19 assists in 14 games as the Marlboros won the Canadian senior Hockey championship. It was also during the season that he earned his nickname. While visiting the Stoney Reserve in Alberta with the Marlboros, the locals presented Armstrong with a ceremonial headdress and called him "Big Chief Shoot the Puck" owing to his own Native heritage. The nickname was often shortened to "Chief"

He played the majority of his first two pro seasons with the Leafs' AHL farm team the Pittsburgh Hornets before making the big club for good at the start of the 1952-53 season.

In 71 games for Pittsburgh, he recorded 15 goals and 48 points. Despite being hampered by hand and wrist injuries suffered in fights, Armstrong was the AHL's leading goal scorer and stood second in points by mid-season in 1951–52. He was recalled to Toronto during the season and scored his first NHL goal, against goaltender Gerry McNeil of the Montreal Canadiens. It was the first goal ever scored by a player with Native heritage. He finished the season with three goals and three assists in 20 games with Toronto.

Armstrong was never a great skater but was rarely out of position; he knew how to play the angles on the opposing forwards and was a great corner man in the offensive zone. He never attained the scoring heights in the NHL as he had in his junior and senior days but Armstrong brought determination, leadership, and humour to a Leafs squad that was trying to escape the shadow of the Barilko tragedy in the early 1950s.

Armstrong was announced as the head coach of his former junior team, the Toronto Marlboros, in July 1972. Though he had preferred his previous role as a scout to coaching, Armstrong led the Marlboros to Memorial Cup victories on two occasions: in 1973 and 1975. In 1977,

Armstrong's name circulated as a possible successor to Maple Leafs coach Red Kelly when the latter was fired by the team. When approached by the organization with the prospect of assuming head coaching duties however, Armstrong rejected the possibility. His decision resulted in animosity from within the organization and subsequently led to his resignation as coach of the Marlboros that season to accept a scouting post with the Quebec Nordiques.