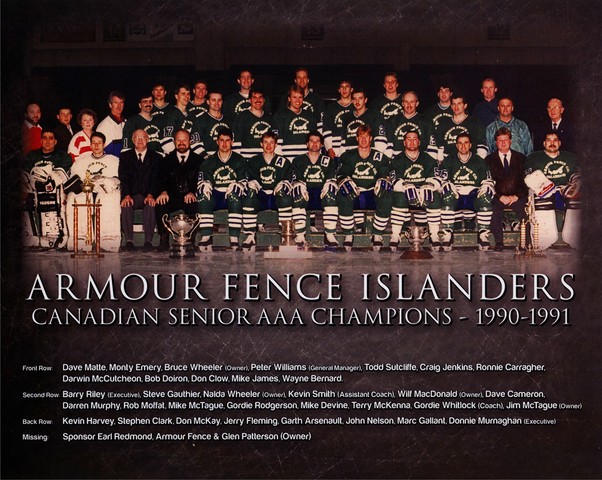 The playoff run began with the Islanders battling back from a 3-2 deficit for a 4-3 win in a bitter series against the Saint John Vitos for the New Brunswick senior AAA championship. John Nelson earned MVP honours.

Next was another tough match as the Islanders outlasted Dartmouth, N.S., in another seven-gamer for the Atlantic senior AAA title. Jerry Fleming scored twice in a 4-2 win to tie the series 3-3, before a Ronnie Carragher hat trick ended matters in the winner-take-all decider.

The Islanders then defeated Laval 4-1 in the Eastern Canadian championship. Kevin Harvey’s overtime winner in Game 4 was one of the series highlights.

This brought five-time winner Thunder Bay Twins into Charlottetown for the Allan Cup final. In front of big crowds at the new Civic Centre, the Islanders played tremendous hockey, jumping out to a 3-0 lead before completing the sweep with a 5-4 overtime win in Game 4, courtesy of a John Nelson winner. Dave Cameron was MVP.

It was the first Allan Cup win by a Maritime team in 56 years.

The province and city of Charlottetown showed their appreciation with a public ceremony on the steps of the Confederation Centre, and then staged a gala banquet at the CP Hotel for the players, coaches, executive, sponsors and fans where Mayor Jack (Spy) Ready – himself a standout defenceman, coach and referee – acted as official host.

The Charlottetown Armour Fence Islanders were inducted into the P.E.I. Sports Hall of Fame in 2015