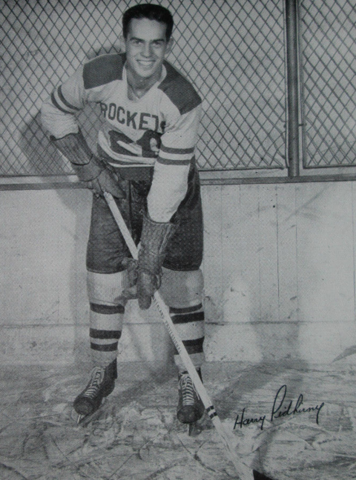 A durable and reliable centerman whose numbers were as good as any player of his time, Harry Pidhirny played 1,071 games over 17 seasons in the American Hockey League.

The Toronto native began his pro career with the AHL’s Philadelphia Rockets in 1948-49, recording 39 points in 68 games. Pidhirny was acquired by owner Eddie Shore before the following season and played two years for the Springfield Indians, beginning a string of 12 consecutive 20-goal campaigns in 1949-50.

The Indians franchise moved to Syracuse for three years from 1951-54, and it was there that Pidhirny broke through as one of the league’s most offensively gifted players, leading the Syracuse Warriors in goal scoring each season. On Nov. 21, 1953, in a 9-1 win over the Providence Reds, Pidhirny tied an AHL record by scoring six goals in one game.

His steady and consistent play continued when the team returned to Springfield, and he would go on to play in five AHL All-Star Games during the 1950’s. He also earned two games with the Boston Bruins in 1957-58 – what would be his only taste of the NHL in his career.

Pidhirny led the league with 60 assists and posted a career-best 81 points in 1958-59, earning recognition as a Second Team AHL All-Star, and he was an important piece to the Indians’ Calder Cup puzzle, winning championships in 1960 and 1961. He finished his AHL playing career in Providence and Baltimore, then returned to Springfield to briefly coach the Indians in 1966, and finally bowing out as a player with the senior Barrie Flyers in 1970.

Pidhirny, who five times in his career played in every one of his team’s games in a season, ranks third in AHL history in games played, sixth in goals (376) and seventh in points (829).

Harry Pidhirny was a member of the first class of inductees into the Springfield Hockey Hall of Fame in 1996.