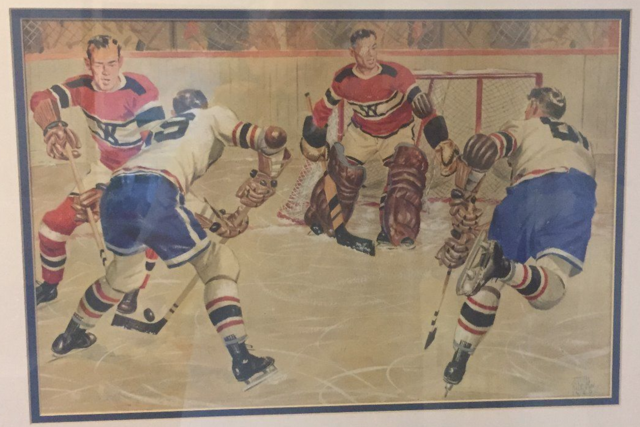 John Cullen Murphy - Born May 3, 1919 in New York City, New York – Died July 2, 2004 in Cos Cob, Connecticut was an American illustrator best known for his three decades of work on the Prince Valiant comic strip.

Murphy started art classes at the age of 9, but aspired to be a baseball player. He was playing baseball when a New Rochelle neighbor, Norman Rockwell, asked the 15-year-old if he would like to model for a painting. Rockwell's Starstruck, showing a forlorn Murphy gazing at pictures of movie starlets, was the September 22, 1934 cover of The Saturday Evening Post. The experience inspired the young Murphy to become an illustrator. Rockwell became one of his good friends and mentors. Murphy started his career early, selling his first illustrations while he was still in high school. After high school, he studied in New York City at the Phoenix Art Institute and the Art Students League, where he was taught by the anatomist George Bridgman.

Murphy's art often depicted sports subjects. His boxing material unexpectedly led him into the comic strip field, something he had never previously considered. In 1950, writer Elliot Caplin (brother of cartoonist Al Capp) of King Features Syndicate asked Murphy to illustrate a boxing comic strip he was planning to write. Murphy accepted his invitation. The resulting daily comic strip, Big Ben Bolt, was launched in 1950 and ran until 1978. Murphy was the artist for the strip for its entire run.

Murphy began his collaboration on Prince Valiant with creator Hal Foster in 1970 when Foster decided to lessen his workload at age 78. With Foster's retirement in 1979, Murphy's son Cullen took over the writing. Cullen Murphy began contributing stories to Foster while studying at Amherst College. Murphy continued to draw Prince Valiant with his son scripting and his daughter doing the lettering and coloring. He retired in March 2004.