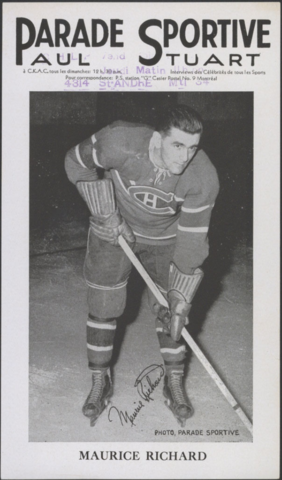 The series has 71 hockey players; many Canadian players, but also players from other teams (often Québécois), trios, whole team portraits and minor circuits players including the famous League of Quebec whose players were popular at that time.

The leaflet dedicated to Hockey remains the most sought after is the Maurice Richard Photo.

What makes the sport Parade so attractive is not only its quaint, but the fact that the production of hockey cards was practically nonexistent in the 1940s For athletes portraits at that time, there was almost as three sources of supply, or the Quaker Oats cereal portraits that feature only the players put the Canadiens and Maple Leafs, portraits offered with the purchase of Bee Hive corn syrup providing a very wide range of players of all NHL teams and sports Parade which had the particularity to focus on Quebec athletes.

Sports antiquarian market of St. Michel, Serge Blouin, a well-known facilitator of sport Parade. "Paul Stuart had printed small black and white sheets bearing the letterhead of his radio show, the Parade Sportive / Sports Parade," said Mr. Blouin. "He was promoting his show and the listeners could get the portraits of their favorite athletes by ordering in Stuart. He sold them at a cost of 10 to the dollar, "adds the expert sporting antiques who knew Paul Stuart.

Paul Stewart became radio journalist in the 1940s His show dedicated to sports called Sport Parade was one of the most popular broadcast on French (Quebec) radio - mainly CKVL and CKAC.