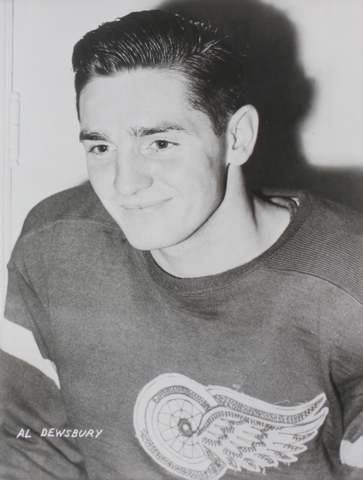 Dewsbury started playing junior Hockey with the Toronto Young Rangers from 1941 to 1945, and along the way he also played for the Toronto Native Sons, Toronto CIL, Hamilton Whizzers, Toronto Fuels, Toronto Maher Jewels and the Porcupine Combines. He was a big Hockey player that teams wanted during their playoffs.

Dewsbury then played his first pro Hockey for the USHL's Omaha Knights in 1945-46, starting in 41 games and scoring six goals and six assists. The following year his time was split between the AHL's Indianapolis Capitals and the NHL's Detroit Red Wings. In 23 games with the Wings, he had two goals and an assist.

Dewsbury and the Red Wings made it to the Stanley Cup finals with Dewsbury on the defense in 1948, but they were swept in four games by the Toronto Maple Leafs.

In 1950 The Red Wings won the Stanley Cup with Dewsbury playing a tough defensive game vs the New York Rangers in the 7 game series, with Gordie Howe and Ted Lindsay leading the way on offence.

Dewsbury was traded to the Chicago Black Hawks by Detroit with Harry Lumley, Jack Stewart, Don Morrison and Pete Babando for Jim Henry, Bob Goldham, Gaye Stewart and Metro Prystai on July 13, 1950, where he would remain for six seasons. In three of the first four years, he played in 69 games and saw action in 67 in the other. From an offensive perspective, his best year was 1951-52 when he scored seven goals and 17 assists for 24 points. Dewsbury and the Hawks never were able to make it to the Stanley Cup finals.

Dewsbury remained playing professional Hockey for another two years with the Buffalo Bisons and Hershey Bears of the AHL, and ended his playing days with the Belleville McFarlands in 1958-59.