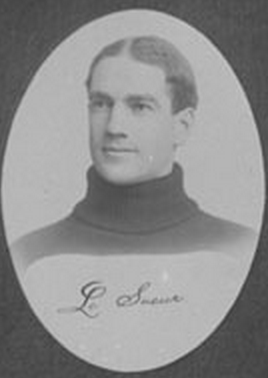 LeSueur was a member of the Smiths Falls Seniors for three years, with whom his performance in a 1906 Stanley Cup challenge series attracted the attention of his opponents, the Ottawa Silver Seven. Although his team lost the series, LeSueur excelled in goal, keeping the games close. Nine days after the defeat, he joined the Silver Seven and played in a challenge match against the Montreal Wanderers. He remained with Ottawa through the 1913–14 season where he served as team captain for three seasons, and assumed coaching duties in his final season with the team.

LeSueur was traded to the Toronto Shamrocks for the 1914–15 season. After playing the following season for the Toronto Blueshirts, he enlisted in the army and fought for Canada during the First World War. He returned to hockey following the conclusion of the war, serving in various roles including referee, coach, manager, arena manager, and Hockey journalist. He coached ten games in the National Hockey League (NHL) with the Hamilton Tigers. As a journalist, he was the first reporter to include shots on goal statistics in game summaries.

During his playing career, LeSueur improved upon existing ice Hockey equipment: he invented the gauntlet-style goaltender glove which protected the forearms, and created and patented the LeSueur net which was designed to catch high-rising shots.

LeSueur was named captain of the Senators for the 1910–11 season. The team led the regular season standings in the National Hockey Association (NHA) with 13 wins, regaining possession of the Stanley Cup. LeSueur was the league leader in goaltender wins in both the 1909 and 1910–11 seasons, having appeared in every game Ottawa played. During 1913–14, his last season with the Senators, LeSueur served as both the coach and captain of the team