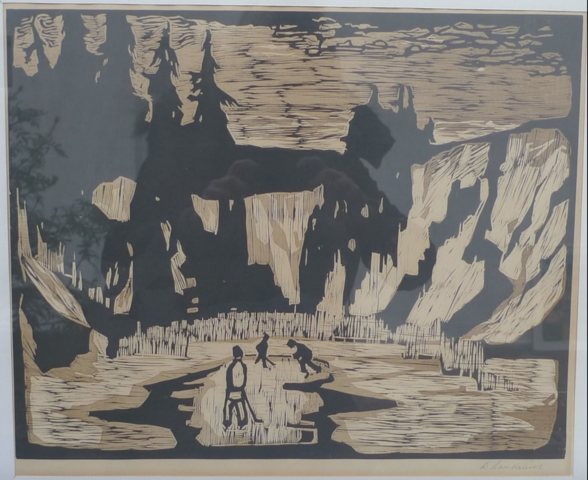 Bertil Landelius acted early to become an artist. After graduating in 1930 he continued his art studies in Copenhagen and at the Skåne painting school in Malmö. In the years 1931-1935 he underwent Higher Industrial Arts School in Stockholm and graduated from there as a drawing teacher.

Already in 1931, however, he made ​​an acclaimed debut at Scania's Art Union Great Autumn Salon in Malmö, where he returned for many years. From the spring of 1934, he also participated in several of Sweden's Public Art Association salons in Stockholm. His first solo exhibition, he had in 1934 in Lund of artist group Aura, in which he was elected as a member in 1937. In Kristianstad had to first become acquainted with his paintings of the great Kristianstad exhibition in 1939.

After the first appearance in Kristianstad in 1939, it took until 1945 before this got to meet Landelius art at a separate exhibition. It was shown in the museum's former art gallery in the Technical School and the Art Society auspices. In addition to participating in some group shows exhibited Landelius then in various premises in Kristianstad in 1951, 1954, 1958 and 1963. In November last year showed a major retrospective exhibition in the museum's art grid in Tyghuset. After a long break, due among other things to Landelius during the years 1962-1969 served as a teacher at the Teacher Training College in Kristianstad, he returned with an exhibition in early 1977 at the museum.

In Stockholm, appeared Bertil Landelius 1942, with a first solo exhibition at gummeson gallery and received a lot of positive criticism. In Dagens Nyheter assessed Yngve Berg his show as "one of the strangest, one of the young, international set Skåne painters demonstrated in Stockholm." Nils Palmgren wrote in Aftonbladet: "Bertil Landelius belong to a wing in young Scanian landscape painting, with the dark tone and the wide, bold brush stroke in contact with the modern Danish art. The quirky and good with his palette is that it must and power where the light is screwed down to a very dull overall effect ". A few years later the same critic wrote: "His motives are simple and commonplace, and the illustrative matters little in his art. The view of a road in the forest, a forest edges, some rocks and frozen water, such motives are him enough. But these, he plays a piece, which has a purely musical richness of tone. "

Bertil Landelius debuted at a time when a new nature romance took shape in the painting from Scania. Of great importance for Landelius was meeting with Carl Fredrik Hill's art, which first became more widely known through a couple of major exhibitions in Stockholm and Malmö in the early 1930s. Another champion, who made ​​a strong impression on him, Paul Gauguin, from whom he learned mainly to take advantage of woodcut technique. Otherwise, it is especially a couple of older Skåne fellow artists who influenced Landelius artistic development, namely Erik Jönsson and Pär Siegård. The former, which, like Landelius was malmöbo but then bard omen spent most of their summers at Ivösjön, imparted to his younger companion a strong feeling for the area around this lake. This led to Landelius 1940 settled in Näsum at the lake's north shore. In the following years he made ​​Ivösjöbygden to their particular artistic domain. While Erik Jönsson mainly painted summer country with its rich flowering has Landelius shown, what this district can provide during other seasons. With particular empathy he depicted winter landscapes with evocative atmosphere effects, both in oil as in watercolor, gouache and pastel, and not least in woodcut.

From the early 1940s showed Landelius a greater interest than before in figure motives, not only in his monumental painting but also in easel paintings and woodcuts. Without the right to work as a book illustrator, he was inspired to carry out a series of free pictures with motifs from the Dickens novel David Copperfield. Poet Dan Andersson, Nils Ferlin and Par Lagerkvist also left motives for image creation. In recent years incorporated Landelius a new area with his artistic domains, namely Blekinge with its archipelago.

Bertil Landelius works are represented in the National Museum, Modern Art and the Malmö Museum.