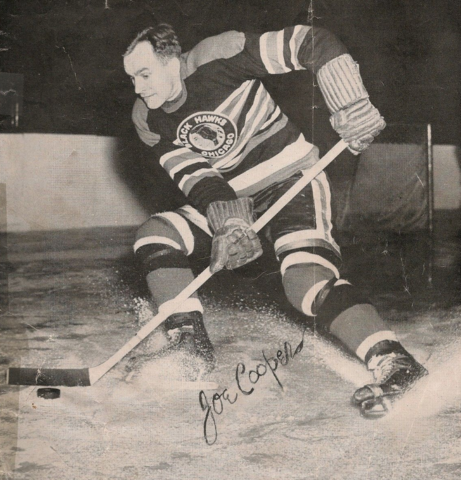 In 1934-35, 20-year-old Joe Cooper began his pro Hockey career in New York playing in the EHL. In 21 games he had five goals and 19 points while racking up 70 minutes in penalties. At 6'1" and 200 pounds, Cooper was one of the biggest and strongest players of his day, and he used his physical superiority whenever possible.
In 1935-36, he joined the Philadelphia Ramblers of the CAHL where he was known as one of the toughest opponents to play against. Many opposing forwards dreaded having to rush the net, or, even worse, face Cooper along the back boards. He had a one-game tryout with the NHL's New York Rangers and impressed team officials.

The Rangers recognized this toughness and put him on their roster for the 1936-37 season. In 48 games, he picked up three assists and 42 minutes in penalties. The following season, he scored his first three NHL goals.

In 1938-39, Cooper joined the Chicago Blackhawks but played the majority of the year back in Philadelphia with the Ramblers in the IAHL. In 1939-40, Cooper started 44 games for the Blackhawks where he scored four goals and eleven points. He played another five years in a Blackhawks' uniform before returning to the New York Rangers in 1946-47.

“Honoured Member” of the Manitoba Hockey Hall of Fame