Ancient Hurling - Sliothars Dating back to the 12th Century 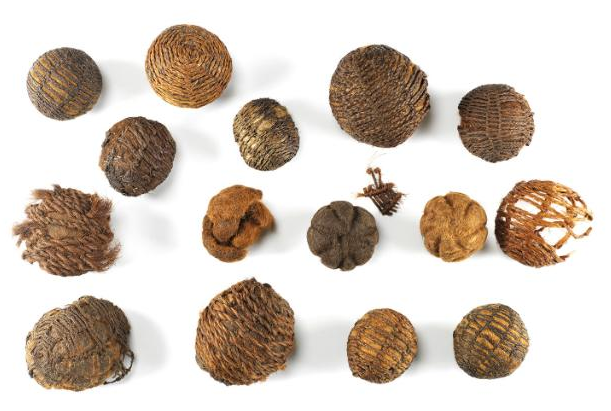 These Sliothars are from a exhibit - Hair hurling balls: Earliest artefacts of our national game, that was at the National Museum of Ireland – Country Life in Castlebar. The earliest was made in the second half of the twelfth century.

The exhibition featured 14 hurling balls made from matted cow hair with a plaited horsehair covering. All the balls have been dated to the late seventeenth century or earlier. Research on these balls revealed radio-carbon dates of the earliest to 800 years ago.

Munster featured strongly at the exhibition with finds from Clare, north Kerry, west Limerick and Tipperary (with loans of balls from Kerry County Museum and Cork Public Museum). There are also balls from east Sligo and the latest ball into the National Museum of Ireland collection is from north Mayo. All were found through hand cutting turf in bogs over the past 100 years.

These balls are the predecessors of the modern leather-covered sliotar.

One of the earliest references to hurling and hurling balls occurs in the legendary tale, Táin Bó Cúailnge, written down in the Book of Leinster around 1160. This is based on earlier legends of Cú Chulainn. The design and style of these hair hurling balls did not change over centuries until the development of the cork-filled leather sliothar.

“They are made out of cow hair that has been pulled off the cows’ backs,” said Ms Clodagh Doyle assistant keeper of the Irish Folklife Division at the National Museum of Ireland “They would have been made in the summer when the cows were shedding their hairs, by rubbing the palms of the hands down the cow. You would just start gathering hair from the body of the cow and then rolling it into a ball and making a matted ball. Using spit and hair, it will just mat together.”

Recent fibre analysis showed that the hairs of the Tooraree ball were from a predominantly white pie-bald calf that was less than a year old. This ball was presented to the museum in June 1980 by Maurice Costello two weeks after it had been found in a turf bog on his brother Morgan Costello’s land in Tooraree Lower.

The Athea ball was found seven sods down in the bog during a turf-cutting session in a bog in Athea and acquired by the National Museum in 1954.

“The one from Athea,” Ms Doyle explained, “was much heavier than the ball from Glenbawn even though they were both the same size.
“It has this big white thing in the middle of it,” said Ms Doyle. “Eventually, we had to get it CT scanned in the hospital in Galway. It showed that it was bone in the inside of it.”

There was some confusion over the find details of the Glenbawn ball. The fragment of the outer cover was firstly posted to the National Museum in 1961 and the ball posted a few weeks later. It was said to have been between five and six feet from the surface of the bog in Glenbawn.

The National Museum of Ireland claim there is a link between the name ‘sliotar’ and the Irish word ‘liotar’, meaning ‘hair’.