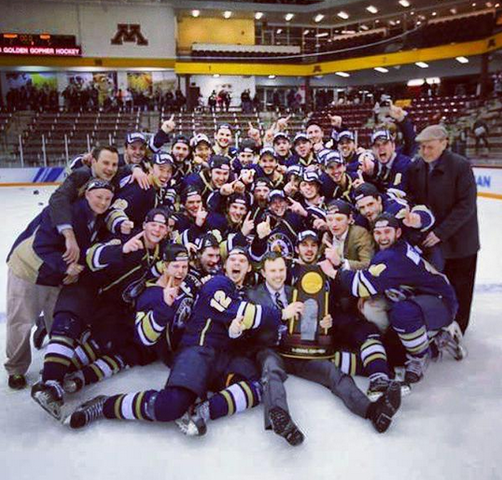 Minneapolis, Minn. – It was a historic evening on Saturday as the Trinity College men's ice hockey team defeated Wisconsin Stevens-Point, 5-2, in the 2015 NCAA National Championship inside Ridder Arena. With the win, the Bantams finished the season on a four-game winning streak with a 25-3-1 record en route to the first national title in program history.

With the score knotted at two late in the third period, sophomore forward Ethan Holdaway (Glastonbury, Conn.) potted his eighth marker of the year to give Trinity a lead they would not relinquish. Holdaway collected a pass from linemate Elie Vered (Ottawa, Ontario) and fired a wrister from just inside the right circle that beat Stevens-Point netminder Brandon Jaeger five hole for the eventual game-winner.

"I can't really put into words how this feels right now," Trinity College Head Coach Matt Greason said. "It's a special day. This group of young men is one of the best I've ever had the privilege of being around. You spend any time around them and you'll see what truly unbelievable people they are. Each guy gave their heart and soul to this program and I'm so proud of them."

Clinging to a one-goal edge with under four minutes left in the game, Trinity junior netminder and NCAA Frozen Four Most Outstanding Player Nathaniel Heilbron (West Vancouver, British Columbia) made several key saves. With under a minute remaining in regulation, the Bantams put the game out of reach with a pair of empty-net goals as seniors Greg Rooney (Worcester, Mass.) and Conor Coveney (Hingham, Mass.) found the back of the net.

Heilbron was huge between the pipes all night for Trinity as he made 35 saves to earn his 19th win of the winter.

"If you're going to win a championship, you need that type of goaltending," Greason added. "The guys and I have all the confidence in the world in him."

On the first shift of the game, the Bantams came out buzzing as first-year forward Tyler Whitney (Wakefield, Mass.) fired a wrist shot from the right circle that clanked off the post. Trinity continued to pressure the Pointers early in the contest and took a 1-0 lead as sophomore forward Sean Orlando (Ivyland, Pa.) redirected a shot by from junior Michael Hawkrigg (Toronto, Ontario) past Stevens-Point netminder Brandon Jaeger 3:38 into the game. Orlando's goal came on the power play and was his 15th of the season as classmate Ryan Cole (Anchorage, Alaska) picked up the second assist.

Seven minutes into the first period Trinity was whistled for a tripping penalty as the Pointers looked to steal away the momentum and tie the game. The Bantams shined on the penalty kill, blocking a handful of shots and Heilbron made three nice saves as Trinity held its one-goal advantage. As the Trinity penalty came to an end, the bench got too aggressive on a breakout and too many men on the ice was called. This time on the power play Stevens-Point made the Bantams pay as Kyle Brodie scored his eighth goal of the season on a blast from the point. Through the remainder of the frame the two squads traded scoring chances, but neither was able to capitalize as we entered the first intermission tied at one.

In the second period, penalties played a big role once again as the teams combined for three penalties. Neither squad was able to score with the man advantage as both penalty kills looked sharp. For the second straight frame, Trinity came out buzzing as Hawkrigg scored less than two minutes in to give the Bantams a 2-1 edge. Senior assistant captain Paul Burns (New Hope, Pa.) took a shot from the point and Hawkrigg fought off a Stevens-Point defenseman and buried his 16th goal of the winter. With eight minutes left in the stanza, Trinity had another scoring chance as Whitney came flying into the offensive zone along the left boards and fired a shot from just beneath the dot in the circle that clanked off the post for the second time on the night.

Stevens-Point tied the game at two midway through the final period Nick D'Avolio scored his seventh goal of the season. Trinity responded aggressively and refused to let the Pointers erase a one-goal third-period deficit for the second straight night.

Wisconsin Stevens-Point held a 37-24 advantage in shots and converted one of their four power-play opportunities. On special team, Trinity went 1-for-4 with the man advantage courtesy of Orlando's first period tally.

The Bantams placed four players on the Frozen Four All-Tournament Team as Heilbron, Orlando, Hawkrigg and senior captain Michael Flynn (Cheshire, Conn.) were honored for their outstanding play this weekend.

"When I came in here four years ago, I felt this program needed a change," Greason said. "I didn't recruit any of these seniors, but from day one they were 100 percent committed to this program. This entire group of guys refuses to lose any battles. You know, I'm coming to the realization that next time we put a line chart together Michael Flynn and our other seniors won't be on it. It's sad to see our seniors go, but we'll enjoy this for some time."