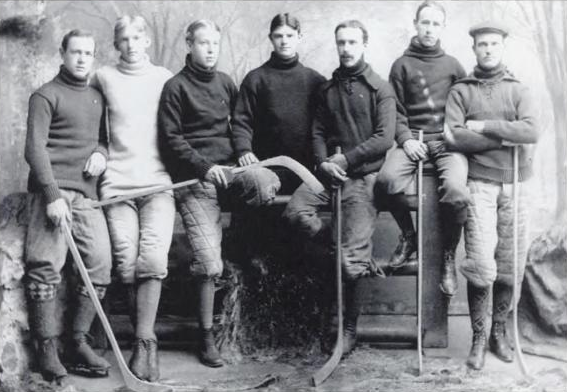 Sports historians are all in agreement that the first intercollegiate Hockey game in the United States matched a team from Yale with one from Johns Hopkins. The authorities concur that the premier contest took place in February 1896.

In the winter of 1895–96, a Yale hockey club began to form. The first article in a Yale publication on an intercollegiate match appeared in the Alumni Weekly in February 1896. On February 5, the report notes that “a few members of the University went down to Baltimore to play matches with Johns Hopkins and the Baltimore Athletic Club.” This concurs with the account by Johns Hopkins that the first match was played on February 1.

The game was described as a stubborn and hard-fought duel, and an evenly matched one at that. It ended in a 2–2 tie.

Two weeks later, on February 14, the two teams again faced off at Johns Hopkins. But this time, the result was a 2–1 Yale victory.

The contest was, of course, the second U.S. intercollegiate Hockey match, but sports fans then and now regard ties as inconsequential, and so Captain Chace’s winning game is credited by Walter Camp and by most sports encyclopedias as the first. The Yale Daily News reported on it at some length and noted the large and enthusiastic Baltimore audience. Yale went on to play a series of matches in the spring against the St. Nicholas Rink Team in New York City: first losing 6–1, then winning 5–1, and finally losing the tie-breaker 2–0. In May the News reported that Yale would join a Hockey league of principal Eastern colleges and athletic clubs.