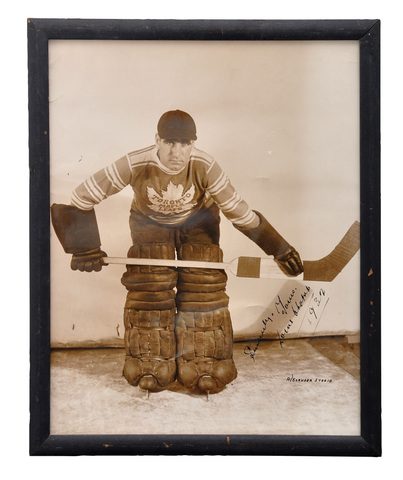 It was in northwestern Ontario that Chabot first gained widespread fame. His relatively large 6-foot 1-inch frame and quick reflexes made him hard to beat. His stellar play contributed to Port Arthur's consecutive Allan Cup triumphs in 1925 and 1926. After the second of these, Conn Smythe signed Chabot to play for the New York Rangers.

As a rookie, "Sad Eyes" won 22 games, recorded 10 shutouts and took the starting netminder's job away from Hal Winkler. In 1927-28 he played all 44 regular-season matches and helped New York reach the Stanley Cup finals. In the second game of the championship series against the Montreal Maroons, an injury to Chabot precipitated one of the most famous maneuvers in Stanley Cup playoff history. Teams didn't carry a backup goalie, so Rangers manager Lester Patrick was forced to make an emergency appearance between the pipes. The "Silver Fox" backstopped the Blueshirts to an overtime win that shifted the momentum of the series and helped New York win its first Stanley Cup.

Prior to the 1928-29 schedule Chabot was sent to Toronto, where he posted a career-best 1.61 goals-against average and 12 shutouts. In 1931-32 he helped the franchise win its first Stanley Cup under the Maple Leafs banner. In the fifth game of the 1933 semifinals against Boston, the teams played 164 minutes and 46 seconds of scoreless Hockey before the Leafs' Ken Doraty scored in the sixth overtime period. Chabot earned the shutout in what was the longest game in NHL history to that date. But in the finals the Rangers prevented the Leafs from repeating as champions.

In the fall of 1933 Chabot was traded to the Montreal Canadiens for George Hainsworth. The trade made the two men the first goalies ever to play for both storied teams. Following the death of the legendary Charlie Gardiner in 1934, the Chicago Black Hawks acquired Chabot in a trade that also involved Hall of Famers Howie Morenz and Lionel Conacher. Chabot showed no ill effects at having to replace the popular Gardiner as he went on to lead the NHL with a 1.80 goals-against mark. The NHL acknowledged his excellence by placing him on the First All-Star Team and presenting him with the Vezina Trophy.

"Old Bulwarks" played 16 regular-season games for the Montreal Maroons in 1935-36, and during the playoffs, on March 24, 1936, he played in the longest game in NHL history. Despite his heroic efforts in that game, the first of the semifinals, the Montrealers succumbed to the Detroit Red Wings when Mud Bruneteau scored the game's only goal after 116 minutes and 30 seconds of overtime.

Chabot played 6 games with the New York Americans in 1936-37 before retiring with 201 wins and 73 shutouts.

Chabot was the first Hockey player to appear on the cover of Time Magazine.