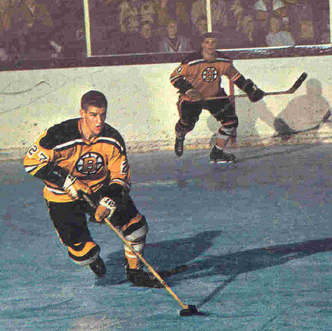 Orr joined the Bruins for the 1966–67 season, his first as a professional.

Through the pre-season, Orr was given jersey number 27 to wear. At the season's start, the Bruins offered him jersey number 5, that of past Bruins star Dit Clapper, but Orr declined and chose jersey number 4.

Orr made his NHL regular-season debut on October 19, 1966, against the Detroit Red Wings, getting one assist. On October 22, he scored his first NHL goal against the Montreal Canadiens. It was a slap shot past Gump Worsley and the Boston Garden crowd gave Orr a standing ovation.