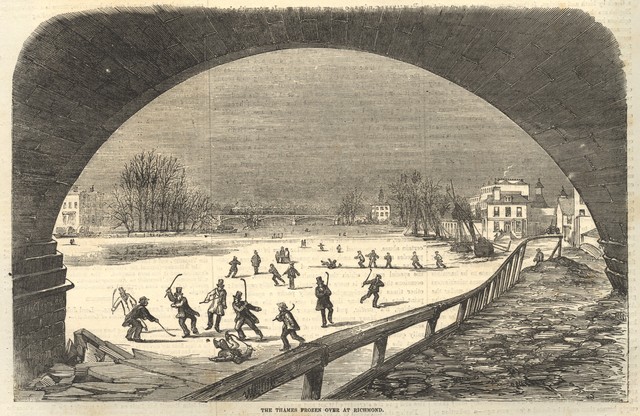 The Thames Frozen at Richmond 1855

Among the memorabilia of the recent frost was the freezing of the entire width of the river Thames at Richmond, which had not occured for seventeen years. Many persons crossed the ice by two paths - one from opposite the villa of the Duke of Buccleuch , and the other just above the bridge, where the ice was much rougher ; both paths were strewed with sand for the safety of the passengers. Some of the Richmond skaters took advantage of this rare state of the river ; but the greater number, including a few ladies, preferred the smoother ice of the large ponds in Richmond park

Our Artist has sketched the frozen Thames as seen through one of the arches of Paine's Bridge, which forms a constituent feature in many beautiful views from surrounding points.

To where the silver Thames first rural grows.

We miss the luxuriance of the pendent woods and deep masses of shade, which are the poetical characteristics of the resplendent river scenery ; but we enjoy in their stead the beautiful forms of the bare bough trees to delight the student of nature, and the sports on the ice to break the silence of the wintry landscape.

Published in The Illustrated London News on March 3, 1855