Jimmy Skinner Started the Tradition of Kissing the Stanley Cup 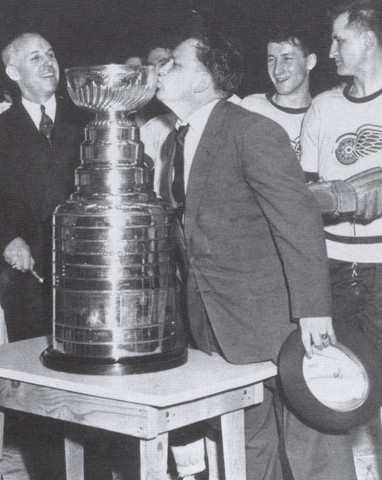 Skinner is credited with starting the tradition of kissing the Stanley Cup.

Skinner played for the Selkirk Fishermen, Winnipeg Rangers & the Winnipeg Falcons in his teens. Skinner he went on to play in Flin Flon, Manitoba, where he worked in the mines when he wasn't playing. He was eventually was offered a contract to play in the New York Rangers' system. He turned the offer down because it wasn't enough to live on in New York.

Skinner was a defenseman and a part-time forward and as a member of the Flin Flon Bomber squad that won the Saskatchewan Senior Hockey League Championship in 1937-38. While playing Hockey in Flin Flon, Jimmie was a left-handed pitcher on the 1938 Flin Flon All Stars/Diamond Ball Championship team as well as the 1940 Zinc Moguls softball championship team.

Other teams Jimmy played for were the Omaha Knights where he was a playing assistant coach, team captain and played with a young Gordie Howe. Also the Indianapolis Capitals as the captain alongside his brother, Morden “Ducky” Skinner in 1943.

As a star defenseman his greatest asset on ice was his body checking ability while maintaining his speed. He was often noted for making a drive singlehandedly down the ice, crossing the blue line & then either hurriedly passing the puck or rifling it at an incredible speed then dashing back to his defense zone. He was interesting to watch as he performed his duties as a player & arbitrator.

Skinner amassed a multitude of injuries at the end of his playing career & these would follow him for the rest of his life. It was at that time Jack Adams, who had been following his progress, offered him a chance to coach the Windsor Spitfires 1947-53. He had one brief departure in 1951-52 campaign when the Spitfires left Windsor for Hamilton in 1953. Honours while coaching in Windsor include 1947/48 J.P. McGuire Trophy (league champion) & 1947/48 Joseph Turner Memorial Cup (Turner Cup) with the Windsor Hettche Spitfires (IHL).

Skinner then became coach of the Hamilton Red Wings. At the offer of Jack Adams again, at the end of 1953-54 season, Jimmie became the Detroit Red Wing's rookie Head coach & won the Stanley Cup in 1954/55. In the 1956 season he led Detroit to a first place standing during the regular season before bowing out in the playoffs.

Illness forced Skinner to give up his bench duties during the 1957-'58 season, but he remained with the club for 42 years.

Skinner, who in the off season conducted two NHL coaching/referee schools (Manitoba, Saskatchewan and in the Maritimes) in conjunction with the Manitoba Amateur Hockey Association.

Skinner's scouting in Europe enabled many European players to play in Canada/USA which is ongoing today. Twenty-seven of his junior players became professional Hockey players in the NHL, International and American Hockey Leagues. A few of these were Glenn Hall, Johnny Wilson, Glen Skov, Al Arbour, and Brian Kilrea. He coached Gordie Howe, Ted Lindsay, Marcel Pronovost, Red Kelly, Alex Delvecchio and Terry Sawchuk, all of whom went on to become Hall of Famers.

Skinner was instrumental with his friend Sam Pollock in creating the NHL Entry Draft as it is known today. He served on this committee which also included Stafford Smythe, Tommy Ivan & Clarence Campbell.

Skinner won the Memorial Cup as General Manager of the Hamilton Red Wings in 1962, who had players like Paul Henderson and Pit Martin on their roster. He also had time to be the Farm Director of the Cincinnati Red Wings in 1963/64.

Jimmie Skinner will be remembered for the kiss that has become a Stanley Cup tradition.