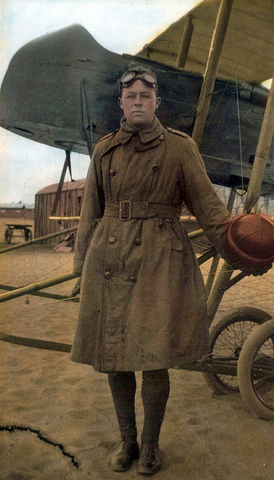 The Maurice Farman S.11 Aircraft was a two-seater biplane developed just before the First World War by Farman Frères, a French aircraft company founded in 1908 by pioneering aviators Maurice and Henri Farman.

A "pusher aircraft," in which the engine is located in front of the rear-facing propeller.

Used initially for reconnaissance and light bombing, and later by the Allied forces as a trainer.

During the First World War, Johannesson served as a fighter pilot and instructor, serving in Egypt and returning to Winnipeg in 1919. In 1920, he played with the Winnipeg Falcons, winning Canada’s first Olympic hockey championship at Antwerp, Belgium. From 1929 to 1934 he was a charter member, manager and chief flying instructor at the Winnipeg Flying Club. During the Second World War, he instructed RCAF pilots and, after the war, he established a flying base at Flin Flon. In 1954, he moved the operation to Rivercrest Airport at Middlechurch north of Winnipeg. In recognition of his community service, he was given a Golden Boy Award in 1965. He died at Winnipeg on 25 October 1968 and was buried in Brookside Cemetery.