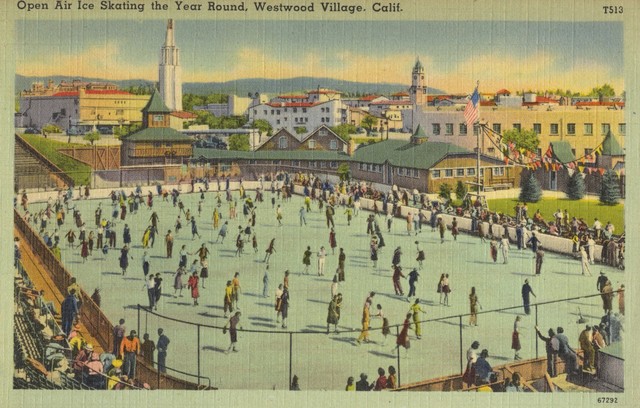 The Tropical Ice Gardens, a huge outdoor, all-year ice rink, opened in November 1938. It was located at the edge of the UCLA campus, on the southwest corner of Weyburn and Gayley.

The tower on the left of the top photo is a building at Weyburn and Westwood Blvd. At the time, it housed Chadwick's Drug Store. The Fox and Bruin Theatres are on the left, as is Le Conte, the street which divides the UCLA campus and Westwood Village.

The rink hosted many Hockey games and was extremely popular with the general public.

Initially open air, by 1941 a roof was constructed and, two years later, a series of war relief charity games were held between the Montreal Canadiens and a Canadian Navy team at what was by then called Westwood Ice Bowl.

The Canadiens actually came to Los Angeles from April 9-20, 1943, for an exhibition series to raise money on behalf of the U.S. and Canada efforts during World War II, a cause that included many NHL players leaving the game to fight for their countries.

The other squads involved in the series were the Victoria (British Columbia) Navy team, as well as one from the Southern California Hockey League called the San Diego Skyhawks. Those teams were fortified with some NHL players, including the famous Bentley brothers – Reg, Doug and Max – from the Chicago Blackhawks.

Montreal, with stars Joe Benoit, Elmer Lach and captain Toe Blake, won the best-of-7 L.A. series, 4-1. The only loss Montreal suffered was by a 6-5 count to Victoria Navy when the Bentleys were involved in several fights.

Los Angeles Times sports columnist Braven Dyer wrote after the final game: “The Flying Frenchmen ... gave Southern California fans an exhibition of high class Hockey and are welcome back whenever they can find time to appear here again.” Dyer wrote in another column: “After watching Les Canadiens and the Bentley boys at the Westwood Ice Bowl, you can put me down as a rabid fan ... the skating lads are staging such a great show.”