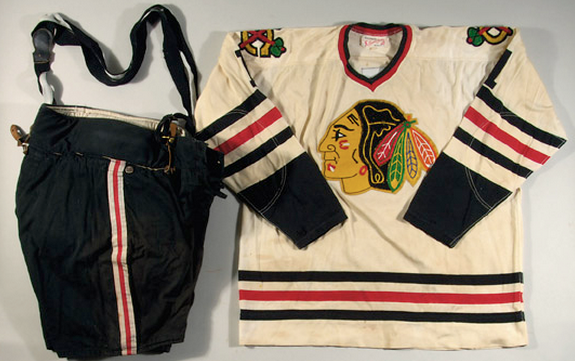 1965-67 Glenn Hall Chicago Blackhawks sweater and pants. White dureen goalie sweater with black and red striping features embroidered Blackhawks logo on chest and tomahawk logos on both sleeves. Player number 1 is stitched on the back.

Hall of Famer Glenn Hall, the man nicknamed "Mr. Goalie", has to be considered a prime candidate as one of the greatest goalies that ever played. During his 18-year NHL career, which began in 1952 and ended in 1971, Glenn Hall posted a 407-327-163 record, 2.51 goals-against-average and recorded 84 shutouts.

He was a First Team All-Star seven times, won three Vezina Trophies, was voted the league's top rookie in 1955-56 and was awarded the Conn Smythe trophy in a losing cause in 1968. Despite his lengthy career,