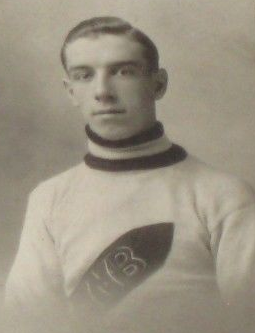 Billy Boucher was 19 years old in this photo.

Boucher would win the Stanley Cup in 1924 with the Montreal Canadiens.

Boucher played in the National Hockey League for the Hamilton Tigers, Montreal Canadiens, Boston Bruins and New York Americans. He also played for the New Haven Eagles and Bronx Tigers of the Canadian-American Hockey League.

Boucher signed with the Canadiens in 1921, and scored 17 goals in his rookie season. Boucher scored 24 goals in 24 games in his second season. In his third season, 1923–24 Boucher was placed on a line with rookie Howie Morenz and Aurele Joliat in a high-scoring trio. Boucher led the Canadiens in scoring, and runner-up in the league. The team defeated defending champion Ottawa in the NHA playoffs and the Calgary Tigers in the Stanley Cup Final.

When the Canadiens team played its first game in the Montreal Forum in November 1924, Boucher scored the first goal in the facility, and the first hat trick.