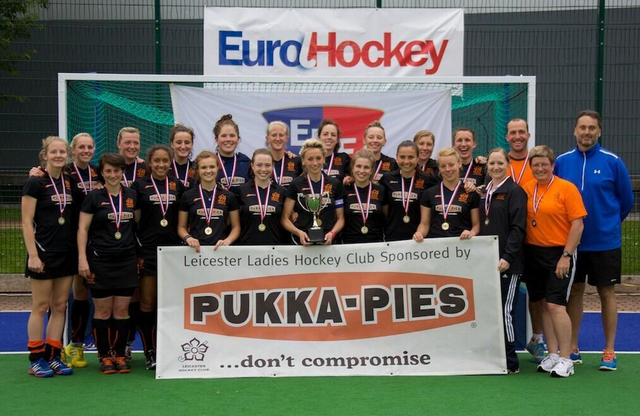 Leicester LHC v CSP Izmaylovo
The final saw hosts Leicester up against an impressive Izmalovo from Moscow. Both teams had 100% records from the pool but Izmaylovo had scored very freely on their way to the final. Leicester began nervously in the sunshine before a big crowd and were behind in the 3rd minute when a rocket from Vasileva beat Tyrell at a penalty corner. For a few minutes it looked as though the Russians would blow Leicester away but soon it was the hosts dominating. Chances cam and went but Hannah Fair levelled matters with a crashing shot from a penalty corner in the 29th minute. Leicester continued to press but the half time score was 1-1.
In the second half the pattern continued. Leicester’s defence looked solid and their speedy forward caused Izmalovo to give penalty corners away. In the 51st minute Katie Long’s goal-bound shot hit a body and Fair stepped up to convert the penalty stroke. Izmaylovo stepped up their game but Leicester looked likelier to score. To the delight of a good crowd the game ended 2-1 and Leicester had won at last after never getting beyond silver medals in European competition.