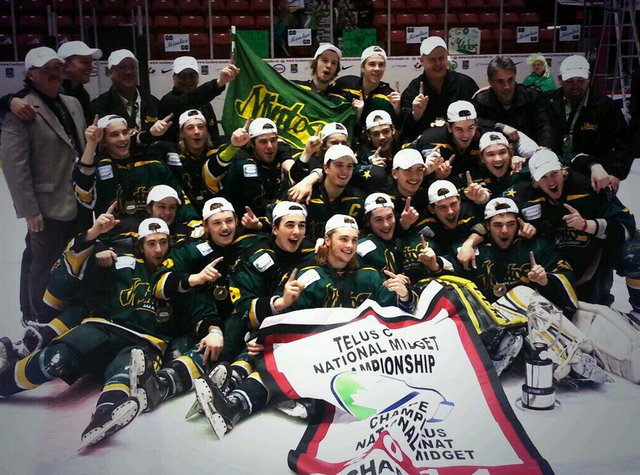 Dakota Boutin scored at 18:36 of the third overtime period. The 16-year-old winger for Moosomin was the triple overtime hero Sunday as the Mintos beat les Grenadiers de Châteauguay 4-3 in the longest game ever in Telus Cup history—108 minutes and 36 seconds long.

Boutin was in on a 2-on-1 with linemate Lance Yaremchuk. Yaremchuk waited out the defence and goaltender Montpetit before setting up Boutin with a cross-crease pass.

Carson Cayer scored twice for Prince Albert, while Lance Yaremchuck added a goal and an assist.
Tyler Hylland scored twice for the Grenadiers, and Martin-Olivier Cardinal scored a power-play goal to tie the game at three goals apiece 14:35 into the third. Cardinal also chipped in with two assists for a three-point night.

The Mintos now have three Telus Cup championships, the second largest total for any Midget AAA franchise. All three of them have come in the last six years, the most in that span.