Nat and Lou Turofsky in front of Alexandra Studios in Toronto 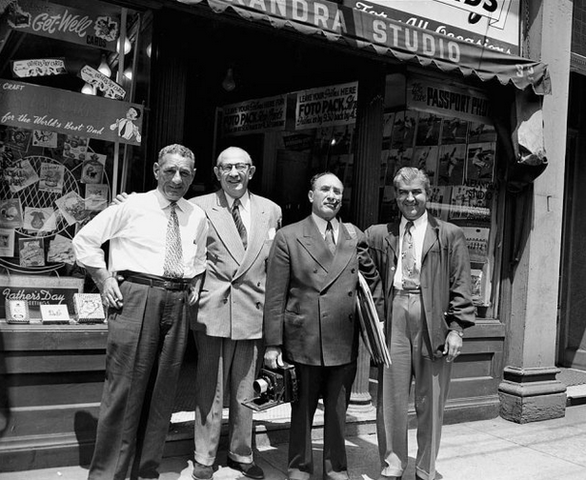 For almost thirty years, from the late 1920s to the late 1950s, brothers Lou and Nat Turofsky photographed the Original Six hockey teams in action, capturing forever many of the greatest moments in Hockey history: Maurice Richard shattering "breakprook" Herculite glass; Bill Barilko flying through the air as he wins the Stanley Cup in overtime; and a bloody and batterred Jimmy Orlando being prevented by King Clancy from going after Nat Turofsky, who had just leapt onto the ice to photograph Orlando's infamous stick-swinging brawl with Gaye Stewart. These are just a few of the unforgettable images that grace the pages of Portraits of the Game.This beautiful volume is also testament to the history of Candaian photography. Lou and Nat Turofsky were pioneers of their craft, as they overcame numerous technical limitations in the days before fast film and super flashes. Their art can be compared to the classic work of such masters as Josef Kudelka, Henri Cartier-Bresson, and Andre Kertesz. The imperial Oil/Turofsky Collection--comprised of 21,000 priceless Turofsky photographs--is housed at the Hockey Hall of Fame in Toronto. The 73 photographs reproduced in Portraits of the Game are among the finest shots from that archive, and, indeed, in the history of sports photojournalism.

The Turofsky brothers were born to Russian immigrant parents in Chicago. Lou Turofsky was the eldest of six siblings. In 1900 the family moved to the Beaches, then a half-suburb/half-summer resort on the outskirts of Toronto, Ontario.

As a twelve-year-old, Lou took an interest in photography and bought himself a pinhole camera to toy with for $1.35 while saving for a better model. In 1907 he began working for Frank Spillar, owner of the Alexandra Photo Company, a Queen Street outfit established in the 1870s. Within a few years, he’d saved enough money to buy the company and—after simplifying its name to Alexandra Studios—hired his younger brother Nat at $5 per week.

The pair worked tirelessly in the early years to build their business. From the early morning until well past midnight each Saturday, they plied their trade at the Scarborough Beach amusements. They’d take snapshot portraits of visitors, then quickly develop them in a nearby tent so patrons could take their souvenirs home that day. Similar services on the other side of town made them a staple at the CNE for nearly the next half century.
With their salesmanship and work ethic, the business steadily expanded to include commercial work for Eaton’s and other companies, wedding photography, and commissioned freelance work for the Mail & Empire and other newspapers.

Their skills were always in demand in Toronto and beyond. The Alexandra Studio did a brisk $100,000-a-year business, with the Turofskys and their assistants accompanying writers to cover royal tours, disasters, society stories, and everything in between. They photographed so many visiting celebrities and beauty pageant contestants—often clowning around and appearing in the photos themselves—that Lou once quipped: “If we haven’t photographed them, they haven’t arrived.” An innovator with a love of horse racing, Lou pioneered a Canadian version of the photo-finish camera—which was immediately called upon to clarify two close finishes upon its debut at Thorncliffe in 1937. The brothers were so busy with work that the Alexandra Studio was a-clutter with photographs piled here and there—many of them unlabelled. Thurza Hesk, their secretary, tried to find order among the chaos as she operated the retail store.

In 1919, the brothers drove six days in a jalopy to cover the World Series in Chicago. Lou somehow charmed his way into watching the games from the White Sox dugout, casually chatting with and snapping pics of Swede Risberg, Hap Felsch, and other players who would shortly afterward be implicated in the Black Sox Scandal. That was the series where some White Sox players “fixed” the games in favour of the Cincinnati Reds and large gambling winnings. A book “Eight Men Out” was later published on the series and its participants. While the players involved were never found guilty, they never again played major league baseball. With the photographs dispatched to Toronto before the series was even over, it was the first of many exclusives the Turofskys snapped for local newspapers.

The Turofskys were the earliest sports photographers to favour action scenes over studio portraits. Lou had an uncanny ability to get his unwieldy Graflex aimed at where the ball/puck would arrive in time to get a key photograph.

The Turofskys are best remembered as sports photographers. Whether it was speed-boat racing, minor-league baseball, ice shows, Hockey portraits / games or muddy football games, Nat and Lou were always in the thick of the action trying to find the perfect shot. Having played baseball and rugby themselves, the Turofskys demonstrated an almost preternatural ability to anticipate split-second action. Sports historian Andrew Podnieks describes how they reached beyond the technological limitations of their era:
In the days before fast film and super flashes and high shutter speeds, they’d have one chance at a play. It had to be a perfect composition, perfectly exposed, and in sharpest focus, no mean feat with those huge, awkward Speed Graphic press cameras they clung to devotedly, almost superstitiously.

The pair also became the official Maple Leaf photographers. One story in circulation about the incident leading to this coup has Lou politely asking a gentleman at the Gardens to remove his hat as it was blocking the game. The gentleman turned out to be Conn Smythe. Mr Smythe, impressed by the courtesy, signed the Turofsky brothers up.

With a simple request that the owner of the St. Pats Hockey team remove his hat for a photo, Nat struck a friendship with Conn Smythe that would last thirty years. The Turofskys became official photographers for the (now renamed) Maple Leafs, and the Gardens became Nat’s home away from home. They took all publicity photos, team pictures, and Stanley Cup victory photos. Nat never missed a game—save for his occasional trips to Florida for baseball’s spring training. He’d position himself at the bench, along the boards in the corner, or over-looking the net. For his favourite picture—which captured the jubilation on the Leafs bench as the final buzzer confirmed the team’s 1947 Stanley Cup victory—Nat jumped onto the ice before the game was even over to score a unique vantage point. Whether it was the exhilaration of victory, or a bloodied face in the wake of a brutal fight, Nat had an uncanny ability to capture, as Podnieks put it, “the moment that defined that game, explained the result, or captured the most noteworthy event of the evening.”
There’s no better example of the Turofsky touch than the photo that remains one of Hockey’s most iconic: Bill Barilko’s 1951 Stanley Cup winning goal. From the perfect angle, Nat caught the exact moment when a diving Barilko scored the overtime goal. The goal light hasn’t been lit; the crowd and players alike remain solemn. No one, save perhaps the photographer, yet realizes that the puck is in the net. Their luck and skill at immortalizing such moments was equalled by the speed at which they developed photos to ensure their timely appearance in the newspapers. Comparing what they did for sports photojournalism with what Karsh did for portraiture, Podnieks asserts that the brothers were instrumental in popularizing Hockey.

Being official Leaf photographers likely led to the famous Beehive photographs of players in the NHL. St Lawrence Starch, makers of Beehive corn syrup offered the photos from 1934 to 1967. People would send in part of a cornstarch package and a request for a player’s photograph.The more popular the player, the more requests. Up to 1959, most of the pictures were taken at the Maple Leaf Gardens by the Turofskys

The Turofskys were, in some ways, a study in contrasts. Lou was the family man—with wife Ruth Seigel and daughters Riki and Carol; Nat enjoyed the lifestyle of a lifelong bachelor. Lou was always chewing on or smoking a cigar; Nat smoked cigarettes. They often found things to argue over endlessly. But they’d always been the closest among their siblings and loved each other—and their work—greatly. The pair were also beloved in the community in large part because they treated everyone, from the newspaper boy to the latest Leafs superstar, with equal respect. It was said that Lou was never the same after Nat died in December 1956. After a 51-year career in photography, he died himself in October 1959. A commemorative volume of their work, Sports Seen: Fifty Years of Camera Work (The Ryerson Press, 1960), was published shortly after his death.
Two of their employees, Roy Mitchell and Hal Crellin, continued the business into the 1970s. In the 1980s, Mitchell divested himself of the Alexandra Studio’s photographs. The Hockey collection—containing 900 glass-plate negatives and 21,000 cellulose negatives, which made it the largest Hockey collection in the world—ended up in the Hockey Hall of Fame. More than 10,000 Alexandra Studio photos including many snapshots of city life and of the photographers themselves were acquired by the City of Toronto Archives. Many other Turofsky works also reside at the National Archives and the Canadian Sports Hall of Fame. Though now scattered, the photography of Nat and Lou Turofsky remains an incredibly rich cultural resource of early twentieth century Toronto history.

Many of their photographs are available today in the Toronto Archives under “Alexandra Studios” and “Roy Mitchell Collection”. DVDs and prints can be ordered. A few images are available for viewing online at the Archives and elsewhere on the web.

A good portion of this article was written by Kevin Plummer at Historicist: http://torontoist.com/