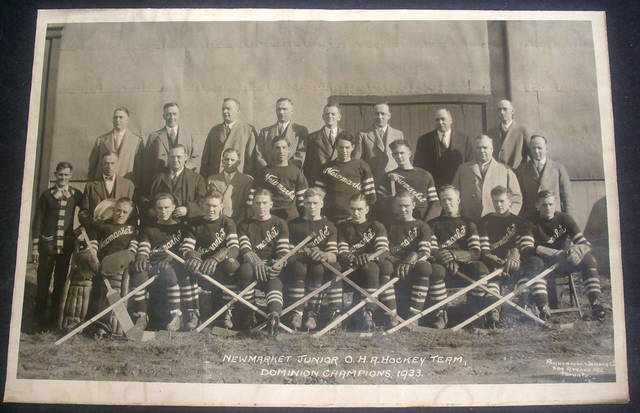 Game 1, played on April 4 before 8,250 fans at Maple Leaf Gardens, was won 2-1 by Newmarket.
Willis Entwistle, writing in the Regina Leader-Post, called it a "thrilling struggle.”
Newmarket goaltender Randall Forder received rave reviews for his work in the opener, especially in the second and third periods when the Pats owned a wide territorial edge.
Mann opened the scoring early in the first period when he beat Regina goaltender Jimmy Franks (who wore a blazing red cap) from the blue line.
Regis (Pep) Kelly scored early in the second to up Newmarket's lead to 2-0 before Reg Strong counted Regina's lone goal about seven minutes later.
Ritchie, writing in The Leader-Post, had this to say: "Newmarket has the fastest junior hockey team I have seen for many a year. They skate like the old 1925 Pats ... just like lightning.”
Entwistle wrote: "Comparisons are odious but, at first glance, the present Pats are hardly as electrical as their predecessors. They are, however, a hard-working, smooth combination and should fare much better in the second game.“

Game 2 on April 6 before almost 8,000 fans at Maple Leaf Gardens, who watched the Redmen win the Memorial Cup with a 2-1 overtime victory (they played 30 minutes of extra time).
Again, Mann opened the scoring, this time batting in his own rebound in the last minute of the opening period.
Les Cunningham tied it on a solo effort late in the second period.
The winner came with less than two minutes left in the third 10-minute overtime period when Don Wilson scored a power-play goal with Regina defenceman Moose Stinson and centre Murray Armstrong in the penalty box.

The crowd of 8,000 went wild, throwing programs and hats onto the ice. The demonstration lasted for several minutes before the teams could play the remaining two minutes.

At the end of the game it caused an outburst from some of the Pats as they surrounded referee Johnny Mitchell. During the fracas the official was jostled and cut in the face by a Pats players stick. Four Pats - Kerr, Franks, Cunningham and Bill Cairns were immediately suspended by the CAHA. "I never saw a more partisan official in my life! "Regina coach Al Ritchie complained to reporter Lou Marsh after the game. "He game us penalties we did not deserve and allowed Newmarket to get away with things for which they should have been penalized."