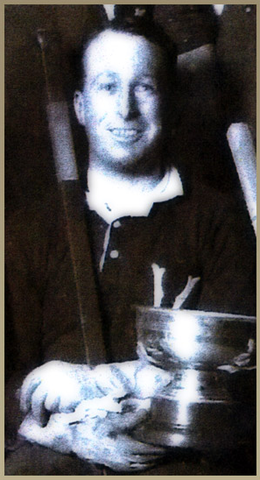 Goodall was the Victorian ice Hockey player who donated the trophy for Australia's first Interstate series to the Victorian Ice Hockey Association. It commenced in the winter of 1909, and the trophy is still known as the Goodall Cup; the holy grail of ice Hockey in Australia. It has been contested annually to the present time with few interruptions and, today, it is the coveted prize fought over by the elite, semi-professional teams of the Australian Ice Hockey League (AIHL).

Goodall grew up in Dickens Street, St Kilda, and was educated at Melbourne Grammar School.

Goodall first played for Melburnians IHC, which had formed in 1908 when Goodall was 15 years-old. His first game on record was with the second Victorian State team in 1910, when he was 17-years-old.

Goodall then played for Victoria until 1913, then resumed again in 1921, after the sport had been interrupted by the Great War. Goodall became captain of Victoria in 1922, convincingly winning back the Cup in Melbourne after the 1921 defeat by New South Wales.

In Sydney, on June 12th, 1922, the New South Wales Association had resolved to defer further discussion on the formation of a national ice Hockey association, until they had met with Victorian Ice Hockey Association (VIHA) delegates during the Interstate series that year. Goodall had become president of the VIHA and this conference took place on July 29th in Melbourne, a few days after the the last Interstate game. It was a conference in addition to the usual meetings held before each series to discuss tournament rules and referees, and its meeting minutes were subsequently confirmed by the NSW Association on August 22nd, 1922. The following year, Goodall became the first president of the Ice Hockey and Speed Skating Council, the first national controlling authority for both ice Hockey and speed skating, formed in Sydney when the Victorian team visited for the 1923 Goodall Cup series, which New South Wales won. Fittingly, in this inaugural year of the national association for ice Hockey in Australia, New South Wales finished dead-level with Victoria on national premierships. Since its inception in 1909, each had won four series of the Goodall Cup apiece.

Goodall had continued to present the Cup and to play; he was selected for the 1925 Victorian Team, which played three tests in Melbourne and three in Sydney that year. Goodall was in his early thirties by this time, and he had played ice Hockey for at least fifteen years.

Goodall was also an accomplished skater who gave exhibitions in September, 1923, with Jack Gordon, Enders and Cambridge and Lena Uksila, sister of Charles who coached Victoria that year. Lena was a visiting professional skating instructor from New York.

Goodall was also a well-known member of the Royal Automobile Club of Victoria (RACV) and he raced cars. He owned a rare 1923 Aston Martin Sports in the mid-1920s when he was in his thirties. Aston Martin’s international racing debut was in 1923, when two cars competed in the French Grand Prix, rapidly establishing the marque’s racing credentials. Later that year, the team went on to break ten world records at the Brooklands motor racing circuit, the world's first purpose-built motorsport venue in England. Goodall began racing the next year and four years later, on March 31st, 1928, he entered his 1923 Aston Martin-Anzani in the 100 Miles Road Race at Phillip Island. This event is now regarded as the inaugural Australian Grand Prix. Goodall's driver was his cousin and yachting partner, Elwood Huon (wrongly recorded as 'E Houn' in Grand Prix records). Huon and Goodall, along with three other cars, did not finish the race. Goodall himself drove the car in the Second and Third Australian Grand Prix on March 18th, 1929 and March 24th, 1930, respectively. He completed only five of thirty-one laps in 1929, but he was placed sixth from eighteen starters in 1930, in a time of 3h 47m 30s.

Although Goodall is best remembered for the now famous Cup, the third oldest National ice Hockey trophy in the world, he had been involved with Australian ice sports since they had started, paving the way and becoming president of the Victorian Ice Hockey Assocation, then first president of the Ice Hockey and Speed Skating Council; the first National controlling authority for both ice Hockey and speed skating. But the Goodall name went deeper and farther back than that. The contribution this family made to Australian ice sports is yet to be fully explored and understood but, like the Thonemanns, John Goodall & Co were investors and brokers of Reid's rink ventures. Which is largely the reason why Australia's first ice rinks, and their associated cold stores and ice cream manufacturers, were listed on the stock exchange for decades.