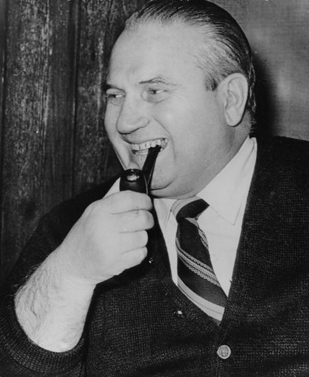 Scotty Munro had a vision. Having dominated the Saskatchewan Junior Hockey League with the Estevan Bruins in the early 1960's, it was time to break away from the provincial league and form the Western Canada Hockey League. Munro's concept was enthusiastically endorsed by Bill Hunter of the Edmonton Oil Kings, Del Wilson of the Regina Pats and Jim Piggott of the Saskatoon Blades. Later, Moose Jaw, Weyburn and Calgary also agreed to form the new seven-team WCHL for the inaugural 1966-67 season. Munro owned and operated the Estevan Bruins before selling his shares in the Club in 1969 and moving on to manage the Calgary Centennials. Munro was not only a visionary and shrewd operator, but also an outstanding coach as many of his players in Estevan and later with the Calgary Centennials went on to highly successful NHL careers. Scotty Munro, a native of Swift Current, Saskatchewan passed away in 1975.

Munro was General Manager, Head Coach and owner of the Humboldt Indians 1951 to 1957.

Munro was General Manager, Head Coach and owner of the Estevan Bruins 1957 to 1969.

Munro was General Manager, Head Coach and owner of the Calgary Centennials 1969 to 1975.

The Scotty Munro Memorial Trophy is awarded annually to the regular season champion of the Western Hockey League. It is named after one of the league's founders