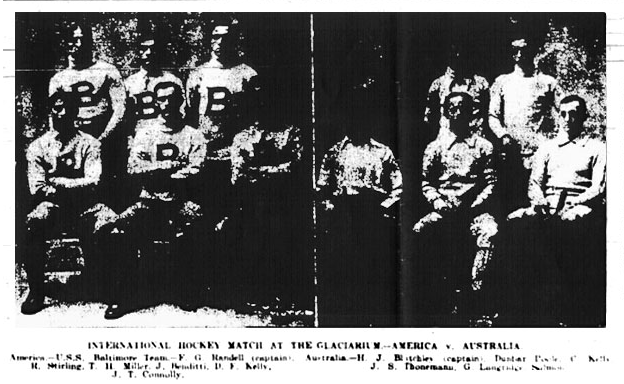 This is the earliest known Australian record of a specific game in a specific place at a specific time, with a recorded score, between two identified teams.

The match was reported in 'Melbourne Punch' newspaper on July 19th, 1906: 'The first Hockey match — Australia v. America — played on ice in this city, which took place last Tuesday night at the Glaciarium may be marked a complete success, and as the teams had been practising some time, was a good exhibition of the game, and most picturesque. The Australians wore full white suits, the Baltimore boys white shirts and grey trousers. Technically, the Australians were not up to the Americans, but put up a very good game, the result of which was a draw, each team scoring a goal. The sight of the players swiftly gliding and dodging about the ice was very pretty and kaleidoscopic in its changes. Fireman T. H. Miller, of Baltimore, played a magnificent game — in fact, he was the centre of the picture during the whole period of the game — just over thirty minutes.'