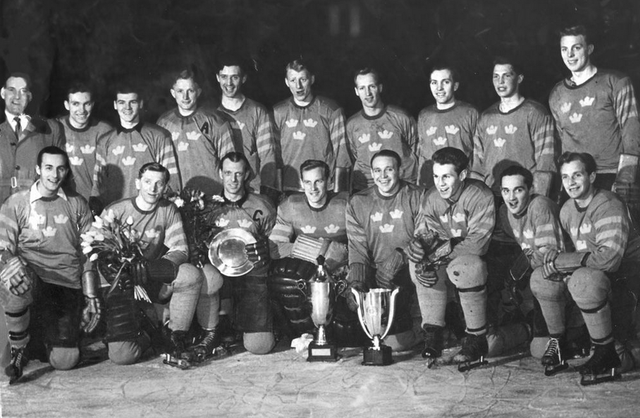 The previous Olympic Games year, revolted by the hard play of North American players, the Swiss president of the International Federation, Fritz Kraatz, said: "We do not want to see Canadians and Americans."

Only four nations are engaged in group A.

This was the first world championship tournament with only European teams. On January 12, 1953, Canadian Amateur Hockey Association president W.B. George stated Canada would not be sending a team to the 1953 World Championships. George told the press: "Every year we spend $10,000 to send a Canadian Hockey team to Europe to play 40 exhibition games. All these games are played to packed houses that only enrich European Hockey coffers. In return we are subjected to constant, unnecessary abuse over our Canadian style of play."

Also absent were the Soviets, it was hoped that the USSR would participate but they did not, sending observers, including legendary coach Anatoli Tarasov to scout the tournament. It is believed that an injury to their star player Vsevolod Bobrov was the reason behind the decision.

Czechoslovakia withdrew from the tournament when it became obvious that their President, Klement Gottwald, was going to die from pneumonia he contracted at Stalin's funeral. General František Janda, the Chairman of the State Committee for the Physical Education and Sport ordered the team home, and Gottwald died the next day, March 14, 1953. The team was disqualified, their results annulled and their remaining games cancelled.